Release of Timeless Melodies by Yesudas 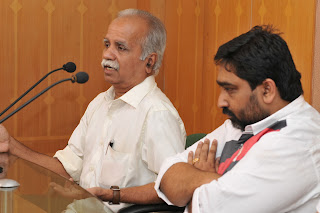 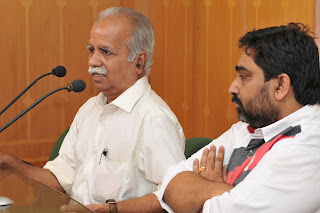 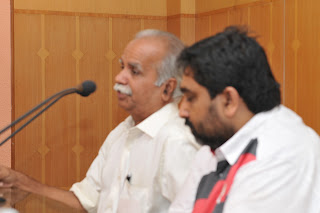 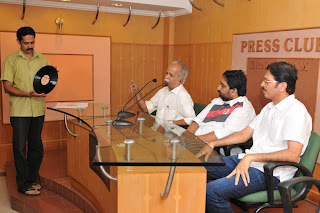 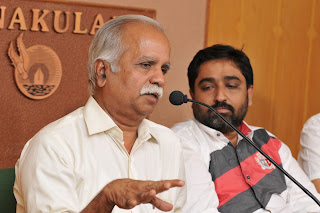 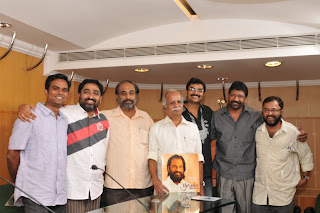 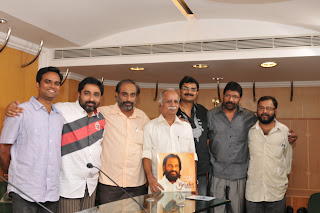 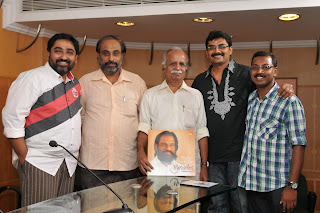 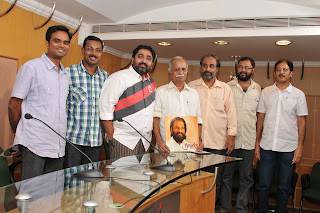 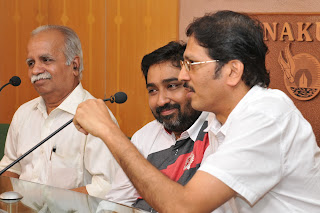 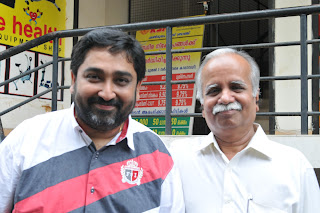 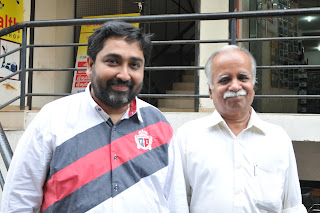 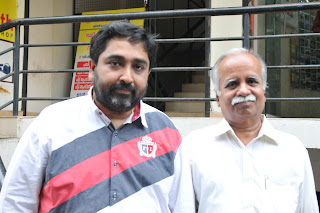 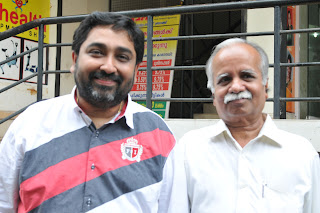 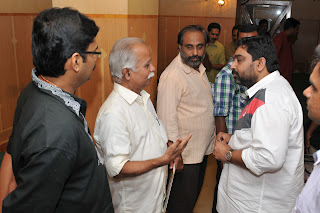 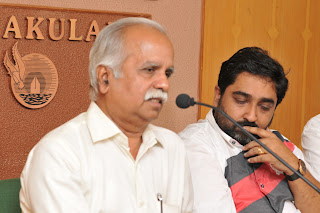 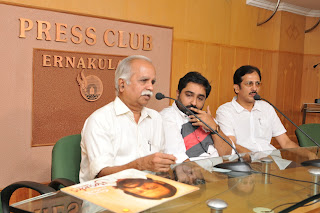 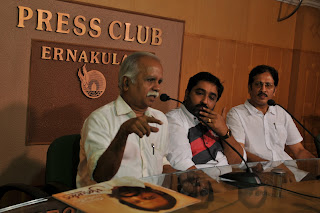 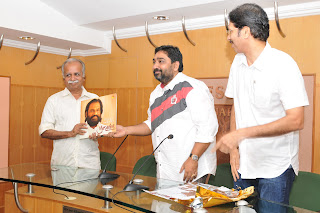 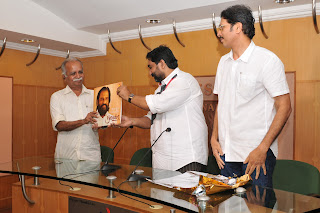 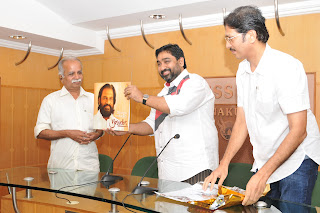 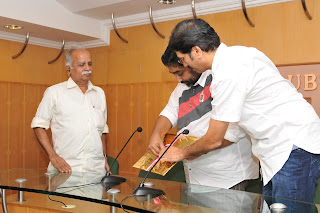 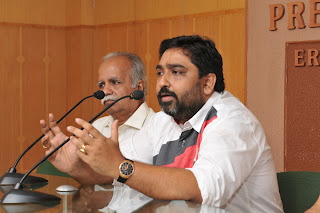 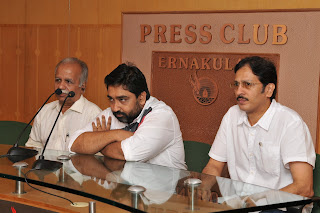 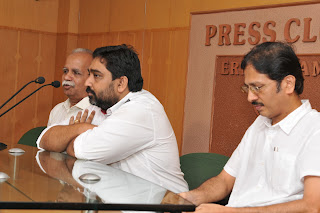 ‘Koottukar' is considered the first Malayalam film with communal harmony as the main plot. Earlier films like ‘Moodupadam' (1963) used this subject as a sub-plot.

V. Shantaram produced the classic film ‘Shejari' (Marathi)/ ‘Padosi' (Hindi) in 1941, both based on this subject. The story was written by the noted Marathi author Vishram Bedekar. ‘Koottukar' adapted the story of Shantaram's classic film with some changes.

Produced by A. K. Balasubramaniam under the banner of Saravanabhava the Malayalam adaptation failed to impress.

The Shantaram film was screened at the Canadian National Film Exhibition at Toronto in 1947 and also went on to win honours at various film festivals.

The film was directed by Sasikumar, dialogues by P. J. Antony and music by M. S. Baburaj. 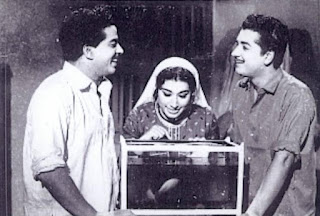 Raman Nair (Thikkurissi) and Mammootty (Kottarakkara) are close friends. Mammootty has lost a leg in a coal mine accident. The two families are very close, a perfect example of communal harmony.

Rahim (Prem Nazir) and Kadeeja (Ambika), the children of Mammootty are brought up by Kaathamma (Aranmula Ponnamma), wife of Raman Nair. And for Mammootty, a widower, Gopi (Sathyan) Raman Nair's son is like his own son.

Gopi is in love with Radha (Sheela), daughter of the village doctor (S. P. Pillai). He gets a job in the coal mine and leaves the village. The wicked Haji (Manavalan Joseph) attempts to molest Kadeeja, but Gopi intervenes in the nick of time and saves her. Haji spreads a false news that there is an illicit relationship between Gopi and Kadeeja. This causes a rift between the two families.

Rahim also gets a job in the coal mine. Here he has to face the rude behaviour of Gopi, his friend and now his superior officer. Rahim decides to take revenge and one night reaches Gopi's quarters armed with a knife. Here Rahim overhears Gopi requesting his superiors to promote Rahim. Rahim realises the true love of Gopi and they unite.

Kadeeja's marriage is fixed. Haji sets fire to Mammootty's house. Raman Nair jumps into the fire to save his friend Mammootty and both of them lose their lives. The film ends with the funeral scene of the two true friends.

Thikkurissi and Kottarakara excelled in their roles. But it did not match that of Gajanan Jagirdar and Mazhar Khan in the Hindi/Marathi film. Again the climax scene was one of the main attractions of the Shantaram classic. The two friends lose their lives when the dam in the village breaks. The fire in the Malayalam film failed to create that impact.

The six songs in the film were written by Vayalar Rama Varma and set to tune by Baburaj. The songs like ‘Asatho Ma sathgamaya…. Oru jaathi oru matham…' (K. J. Yesudas), and the duet ‘Kurumozhi mullappoo…' (Yesudas- S. Janaki) went on to become big hits. The other popular numbers include ‘Kannaadi koottile…' (P. Susheela), ‘No vacancy, no vacancy…' (Yesudas), ‘Nizhalukale nizhalukale…' (Yesudas), and ‘Veettilinnale vadakku ninnu…' (P Leela and chorus).

Will be remembered: As the first Malayalam film that focussed on the theme of communal harmony. Also for some of its memorable songs by Vayalar Rama Varma and M. S. Baburaj.

Posted by Ajay Menon at 6:06 AM No comments:

Email ThisBlogThis!Share to TwitterShare to FacebookShare to Pinterest
Labels: Koottukaar

There are some indications, and nowhere documented facts, that led to the entry of the singer to Malayalam. Probably one lullaby sung by her in a Tamil flm paved the way for this. I have come across such references in the past - interviews, comments by music personalities etc. Once a media person asked me whether I remember any lullaby sung by Suseela in mid 1950s that made her famous. I could not recollect, because it was her early period. And quite amazingly recently I happened to listen to one of her early lullabies. The media persoan asked me about the lullaby, on the basis of his interview with the playback singer P Jayachandran who referred to this song, and that he did not remember the details of the song. I located the melodious lullaby. It is from the tamil film "Kanavane Kan Kanda Deivam". (1955). I remember to have come across comments on this song, and probably this song might have paved the way for her entry to Malayalam cinema. For the first song by her in Malayalam, a lullaby, "Paattu paadi..." resembles her tamil lullaby. In both the songs, the mother character 's imagination is about the bright future of her son/sons. In the Tamil film, Anjali Devi, the heroine abandoned in the forest and struggling with her infant son sings the song. In the Malayalam film, Seetha Devi sings the song, abandoned in the forest and given refuge by the Sage Valmiki.

Listen to the Tamil song and recollect your memories of the Malayalam lullaby.

Listen to the song here

Posted by SJoseph at 1:22 PM No comments:

Documenting the history of Indian film music - a challenging task. Malayalam film music, more difficult .
Songs recorded, but not included in the film. Songs once released,, subsequently removed. And so on. No documentation of such happenings.

Recently I got a 78 rpm gramaphone record of two songs from the film. And I am surprised to note that these songs are not there in the songs book of the film
But the record lable clearly indicate these songs as from the film "Stree Hrudayam"
For your listening, I am attaching the songs.
Gramaphone record - Columbia record No. GE 36026
One is a Kathakali padam - probably from "Uttara Swayamvaram" (as the text indicate) " Pranavallabha...." - LPR Varma, Tripura Sundari and Shanta.
(Nothing known about the singers Tripurasundari and Shantha)

The story indicate the possibility of these songs in the film. The heroine is daughter of a temple priest. Ashtapadi being a Sopana sangteetham number being sung traditionally in temples. Other one, Kathakali, a temple art, the Kathakali padam also possible in the film

Listen to the songs here

Chandana Charthitha
Pranavalabha
Posted by SJoseph at 1:21 PM No comments:

Tamil Cinema history notes that the song was removed to reduce the length of the film. But the released gramaphone record of the movie included this song. The song sequence which the audience could not watch on screen, became a super hit and one of the early hits of Susheela.

And I remember clearly, Ceylon Radio used to broadcast this number, with special announcement about the song - THIS IS THE HIT NUMBER THAT IS NOT INCLUDED IN THE MOVIE.

Malayalam cinema history doesn't have any mention of a song being dropped for similar reasons. I mentioned about the songs from Stree Hrudayam. I could know about the songs, only after getting the gramaphone record of the songs.

Listen to the tamil song.

Posted by SJoseph at 1:11 PM No comments:

Email ThisBlogThis!Share to TwitterShare to FacebookShare to Pinterest
Labels: B Vijaykumar

‘Kanakachilanka' was an unusual Malayalam film with a thief as the hero. Some earlier Malayalam films did have golden-hearted heroes in disguise as outlaws or bandits. ‘Kerala Kesari' (1951) and ‘Thaskaraveeran' (1957) are two such examples. But the hero of ‘Kanakachilanka' was a ‘real' thief with a romantic heart. The plot of the film was from the block-buster Hindi film ‘Kismet' (1943) that created history by running continuously for three years in a single theatre in Calcutta. This film was an adaptation of the Hollywood film ‘Algiers' (1938).

‘Kismet' faced protests as it was felt that the film glamorised criminal life. In spite of such protests, the film became one of the most successful Indian films and its remakes ‘Premapasam' (Tamil-1956) and ‘Bale Ramudu' (Telugu-1956) were also hits.

The German film ‘Pick Pocket' (1959), directed by Robert Bresson, exhibited with English sub-titles was also popular in the country. Prompted by the success of these films, Sunderlal Nahata decided to produce a Malayalam movie with a similar story. The film had Prem Nazir in the lead.

Directed by M. Krishnan Nair, the script and dialogues written by Thoppil Bhasi, was the high point of the film. Editing by Prakasham, camera by B. J. Mohan and music composed by M. S. Baburaj were the other attractions of the film. 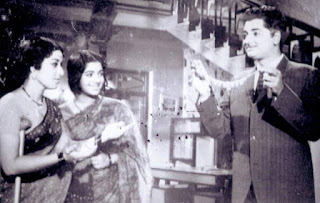 A rich landlord, Krishnan Thampi's happy family life takes a strange twist. His elder daughter Lata (Sheela), who is fond of music and dance, was crippled following an accident in her childhood caused by Shekhar, the son of Thampi's manager, Gopala Panikker. Shekhar is beaten up by Thampi and thrown into the nearby river. Thampi is sentenced to life on charges of murder. Thampi's wealth is appropriated by Panikker, leaving Lata and her sister Rema struggle for their livelihood. Years roll on.

Thampi befriends Ramadas (Prem Nazir), another prisoner in jail. Thampi sends a letter to Lata through Ramdas who he released. Ramdas introduces himself to Lata as an insurance agent. He rents a portion of Lata's house and they fall in love. Ramdas steals a diamond necklace from Panikker's house and gifts it to Lata. Meanwhile, a well-wisher arranges for the surgery and treatment of Lata's leg. She is cured.

Rema is arrested by the police for being in possession of the necklace. Lata tells the police that the necklace was gifted to her by Ramdas. The police then reveal the real identity of Ramdas and he absconds. Thampi is released from jail. He reaches the theatre where Lata's dance programme is on; Ramdas also reaches the venue. The police, who are tracking Ramdas, try to apprehend him. Ramdas is injured in the firing that ensues. Panikker identifies Ramdas as his son Shekhar from the scar he sees on his injured hand. Lata marries Ramdas.

The Malayalam remake was not as successful as the other versions. The producers adopted a new promotional technique. A dance sequence by Sheela which was removed by the Censor Board was included a few days after the release of the film.

Will be remembered: For the good music, especially for the song ‘Manaswini manaswini…' and as the first Malayalam film that included an additional scene after the release.

Posted by Ajay Menon at 6:08 AM No comments: