Like the ‘love triangle,' another favourite subject for films is that of the ‘other woman' The Telugu film ‘Swargaseema' (1945) was probably the first popular Indian film that focussed on this rather controversial subject. Tamil films like ‘Rakthakkanneer,' ‘Illara Jyothi,' (1954) ‘Town Bus' (1955) etc. are examples of successful films with this theme. The ageless subject even finds its place in ancient Tamil epics like ‘Chilappathikaram' based on which Tamil films ‘Kannagi' (1942), ‘Poompuhar' (1964) etc were made.

In Malayalam, ‘Bharya,' (1962) produced and directed by Kunchacko under the banner of Udaya Studios is considered the best and most popular film that discusses this subject. The film was adapted from the novel of the same title by E. J. Philip, popularly known as Kaanam E J. The novel is said to be based on a real incident, the Thiruvalla Ammalu murder case. Some of the early Malayalam films like ‘Ponkathir' (1954), ‘Ashadeepam' (1954), and ‘Mariyakutty' (1958) also used this same theme. Released as a Christmas gift, on December 20, 1962, the film broke many a box office record.

The dialogues written by Ponkunnam Varkey became a favourite and for the first time in Malayalam cinema dialogues of important scenes were released in a set of four 78 rpm records. 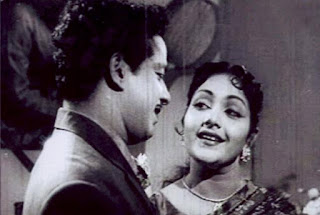 Popular artistes like Sathyan, Kottayam Chellappan, S. P. Pillai, Ragini, Adoor Pankajam starred in the film. Rajasree made her Malayalam debut in this film. Her name in the title cards was listed as Gracy, the name of the character in the film. Her role as the ‘other woman' became so popular that in some of her later films also her name in the title cards was shown as Gracy.

Benny (Sathyan) runs a parallel college. He leads a peaceful and happy family life with his wife Leela (Ragini), and children Molly (Baby Seetha) and Rajan (Master Jijo). Benny falls in love with Gracy (Rajasree), one of his students. Gracy's parents (S. P. Pillai and Adoor Pankajam) take undue advantage of Benny's blind love for Gracy. They gradually manage to eat into his wealth. Leela's attempts to bring her husband back fail. In fact, Benny does not even visit his ailing father Dr. Joshua (Kottayam Chellappan).

Benny plans to elope with Gracy. When Leela tries to prevent him she is beaten up. Leela falls unconscious. Thinking that Leela is dead, Dr Joshua orders his son to shoot her. He wanted to create an impression that Leela had committed suicide. Benny pulls the trigger. Leela, who was unconscious, dies of bullet injuries. Benny is arrested by the police.

A stand out performance by Ragini and Sathyan in the negative role were the highpoints of the film.

Will be remembered: For its excellent music and the good story. As the film debut of Kaanam E J and the first Malayalam film of Rajasree.

Posted by Ajay Menon at 4:05 AM No comments:

Email ThisBlogThis!Share to TwitterShare to FacebookShare to Pinterest
Labels: Bharya

Popular film companies and producers have always been engaged in a fierce competition. The result has been some excellent social, historical, action movies. In some cases films with the same plot or concept have been made and released almost simultaneously. There are also instances where movies flopped as a result of this competition.

Take the case of the Tamil films ‘Gnana Soundari' (1948). Two films, with the same title and storyline, one produced by Gemini Films, with M. K. Radha and V. S. Suseela in the lead roles and the other by Citadel Films that had T. R. Mahalingam and M. V. Rajamma in the lead roles. These films were released within a month of each other. While the Gemini film flopped the Citadel version became a runaway hit, a classic. 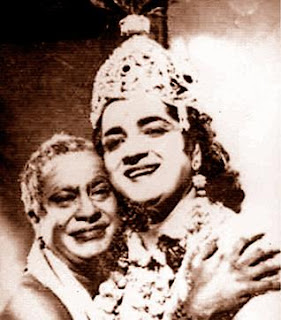 The Telugu film ‘Krishna Kuchela,' released on June 6, 1961, was the inspiration behind the production of the two Malayalam versions. This Telugu film, directed by C. Narayanamoorthy, was a crowd puller and is considered as one of the best mythological films in the language. Kuchela, played by C. S. R. Anjaneyalu, an actor noted for his mythological roles, came up with a brilliant performance. In fact, his role in the Neela production is widely believed to be the reason behind the film's success. The role of Krishna was played by another popular Telugu star, Kantha Rao. ‘Bhakta Kuchela' was an unusual collaboration between a Malayalam producer and an array of Telugu stars.

Directed by Kunchacko, ‘Krishna Kuchela' was shot at Udaya Studios. The dances choreographed by Hiralal and cinematography by T. N. Krishnankutty were commendable. The high point of the film was its music, which was composed by K. Raghavan.

Popular artists like Sathyan, Prem Nazir, T. S. Muthiah, Kottayam Chellappan, Ragini, B. S. Saroja, and KPAC Sulochana were cast in important roles. Apart from the popular story a few sequences from the Bhagavatha, like the birth of Krishna, Radha's love and devotion towards Krishna, enmity with Sisupala, slaying of Kamsa etc. were included as a sub-plot.

The competition between these two films was apparent in music and advertisement techniques. The distinctive numbers of the 78 rpm gramophone records of the songs indicate that they were released the same day or same week. Along with the publicity notices of ‘Bhakta Kuchela', especially in the theatres, ‘aval' or beaten rice was distributed in small packets wrapped in the publicity notice itself. Not to be left behind the publicity material of ‘Krishna Kuchela' were sent to houses along with ‘aval kizhi' or beaten rice packed in a small piece of cloth.

The songs in both the films were good. In this case, however, ‘Krishna Kuchela' scored. There were 22 songs in this film. Written by P. Bhaskaran and tuned by K. Raghavan some of them like ‘Omanakuttan Govindan…' (Shanta P. Nair), ‘Marayalle mayalle Radhey…' (K. Raghavan), ‘Umma nalkuthengineyamma…' (P. Susheela) and ‘Varnippathengine nin…' (M. L. Vasanthakumari-P.Leela) turned hugely popular.

Will be remembered:‘Krishna Kuchela' did not do well at the box office but it will be remembered as one of the two films with the same story, produced at the same time, which was the first instance in Malayalam cinema. It will also be remembered for its good music.

Posted by Ajay Menon at 5:35 AM No comments: