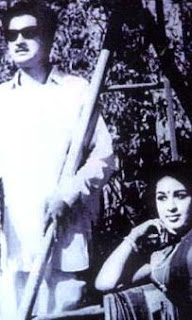 This film was an adaptation of Guru Dutt’s classic Hindi film ‘Pyaasa’ (1957). Guru Dutt’s vision in his tragic epics was unique and his genius unmistakable. ‘Pyaasa’ is considered as his greatest work. This film explored his favourite theme - the place of an artist in a crass commercialised world. This was the theme of another Hindi film ‘Raja’ (1943) produced by Poornima Productions and directed by Kishore Sahu. ‘Kavyamela’ pales in comparison to the two.

Guru Dutt’s exploration of the tragic idiom is unprecedented in Hindi cinema. According to him the inspiration for ‘Pyaasa’ came from a lyric by the Greek poet Homer that read ‘seven cities claimed Homer dead, while the living Homer begged his bread.’

The brooding imagery in black and white and the unrelenting bleakness of Guru Dutt’s world view which were the highlights of his film was missing in the Malayalam film. But in spite of all this ‘Kavyamela’ was a thumping box office success.

Produced by T. E. Vasudevan under the banner of Jayamaruthi Productions, the film was directed by M. Krishnan Nair.

The film had Prem Nazir in the lead role of a tragic lover, and is considered one of his best performances. The dialogues by S. L. Puram Sadanandan were one of the highlights of the film.

Except for some minor twists in the story, the film followed ‘Pyaasa’ very closely.

Jayadevan (Prem Nazir) loses his eye sight while at college. A very talented poet, he lives with his sister despite the constant taunting of his brother-in-law. Unable to bear the humiliation Jayadevan leaves home. He meets Vikraman (Adoor Bhasi), a city wastrel who takes him to a temple where Jayadevan sings in praise of the Goddess. Vikraman collects the money offered as charity to the blind singer by the devotees. When Jayadevan comes to know of this cheap trick he breaks away from Vikraman.

Sreedevi (Sheela), daughter of Dr. Panicker (G. K. Pillai) meets Jayadevan. She takes pity on the blind singer. Dr. Panicker comes to know that Jayadevan is the son of his childhood mate. He offers to treat Jayadevan.

A surgery is conducted and Jayadevan regains his eyesight. Sreedevi falls in love with Jayadevan. Dr. Panicker had already planned her marriage with his nephew Balachandran (Nellikkodu Bhaskaran). When Balachandran comes to know about the relationship between Sreedevi and Jayadevan he withdraws from the marriage.

Jayadevan who did not want to do anything against the wishes of Dr. Panicker, leaves the house.

Jayadevan wanders around seeking a publisher for his poetic work ‘Kavyamela’. When none of the publishers offer to do so he dumps the manuscript in frustration.

This manuscript finds its way to the hands of Vikraman who manages to find a publisher. Claiming that he is the author, Vikraman has the work published. ‘Kavyamela’ becomes an instant hit and Vikraman becomes rich and famous overnight.

‘Kavyamela’ wins the Sahitya Academy award. Jayadevan and Balachandran come to know about the fraud. They succeed in snatching the manuscript from Vikraman.

In a melodramatic climax Jayadevan reaches the venue where a function is organised to honour Vikraman for the award. Jayadevan proves before the people there that he is the real author. He rejects the award which is now given to him. He tears the manuscript of his work into pieces, rejects Dr. Panicker’s request to marry his daughter and walks away.

The film was shot at Newton and Shyamala Studios. Camera work by C. J. Mohan and editing by T. R. Sreenivasalu was commendable. Prem Nazir excelled in his role. S. P. Pillai as Kamath, in a cameo role as a merchant who buys and sells old paper and scrap impressed. The comedy track involving Adoor Bhasi and Muthukulam Raghavan Pillai was also good.

A scene in which the prominent music directors, lyricists and singers of the industry appeared to sing a part of a song, ‘Swapangal, swapnangale…’ was a novel experience. It is said that music director V. Dakshinamoorthy had composed over 20 tunes for this one song out of which they finally zeroed in to one of them. Some of the other tunes that Dakshinamoorthy composed for this song are represented in this scene.

The film was remade in Tamil as ‘Devi’ in 1968. Directed by A. K. Velan it had Muthuraman and Devika in the lead roles. The music composed by Dakshinamoorthy followed the tunes he had made for ‘Kavyamela”.’ But this film was not very successful at the box office.

The music of the Malayalam film was a huge hit. The songs penned by Vayalar Rama Varma, set to tune by Dakshinamoorthy were super hits. Most of the songs were raga-based. ‘Devi Sreedevi thedi varunnu…’ sung by both K. J. Yesudas and P. Leela based on Valachi, the Yesudas-Leela duet ‘Swapnangal, swapnangale ningal … ‘ based on Sahana, ‘Janani jagajanani…’ (Yesudas) based on Bilahari raga became eternal favourites. Playback singer Uthaman’s most popular film song ‘Ishwarane thedi thedi…,’ ‘Swarganandini…’ (Yesudas), ‘Theertha yathra ithu….’ (Yesudas- Leela) made this film a virtual musical treat.

Will be remembered: For the excellent music and memorable songs. It will also be remembered for Prem Nazir’s acting.
Posted by Ajay Menon at 9:21 AM No comments:

Email ThisBlogThis!Share to TwitterShare to FacebookShare to Pinterest
Labels: Kavyamela 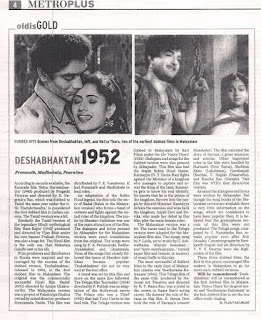 Posted by Ajay Menon at 7:33 AM No comments: