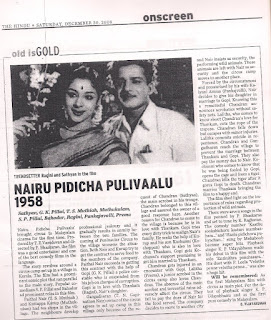 This film is considered to be the most successful film made on Sabarimala. It sparked the beginning of a series of similar movies in almost all South Indian languages.

Produced under the banner of ‘Sastha Films’ by K. Kuppuswamy, the film was directed by the famous South Indian director Sreeramulu Naidu. The script and dialogues penned by Thikkurissi Sukumaran Nair told the story of the deity in a simple and impressive style. The colour processing by Film Centre, Bombay, was much more perfect than the first colour film in the language ‘Kandam Becha Coattu,’ released the same year. Most of the scenes were shot at Pakshiraja Studios with cinematographer Shailen Bose showing great technical skill especially in canning the outdoor forest sequences.

King Rajasekhara (Thikkurissi), the king of Pandalam, finds a child on the banks of River Pampa during one of his hunting expeditions. A saint who appears there advises the king to adopt this child name him as Manikantan… so goes the popular story. Ambika is the queen. Bhanuvikraman, the minister is played by G. K. Pillai. Mahishi (Ragini) is the demon princess who is killed by Manikandan, thereby fulfilling the mission for which he was born on earth. Manikantan returns from the forest with a herd of tigers. Manikantan gives up the throne and goes to the forest for penance. The king constructs a temple at Sabarimala.

Rajan as Manikantan, Hari as Rajarajan and Master Jitendranath and Master Georgie Thomas in the childhood roles of Manikantan and Rajarajan did justice. The film included some sub plots, which one may not be able to find in ‘Bhoothanathopakhyanam’ and ‘Ayyappan Paattu,’ which tells the story of Lord Ayyappa and Sabarimala temple. Scene like the one in which Manikantan gives sight to the blind son of his Guru (T. S. Muthiah), the Gurukula sequences, and those involving Manikantan and Vavar (Kottarakkara) were impressive.

Padmini’s guest appearance as Mohini and the dance sequences with dance director Thankappan in the role of Bhasmasura, was one of the attractions of the film. The comedy scenes, that of ‘Parvathi Vilasam’ Ayurvedic dispensary featuring S. P. Pillai, Adoor Pankajam, Manavalan Joseph etc. proved to be a unnecessary diversion from the main plot.

The film was dubbed to Tamil and exhibited throughout Tamil Nadu successfully that same year.

There were 12 songs in the film, penned by Abhaya Dev and tuned by S. M. Subbiah Naidu. Some of the songs became super hits and are still popular. The lullaby ‘Swargam kaninju jagathinnu thanna...’ by P. Leela, is considered as one of the kind in the language. Singing star of early Tamil cinema and playback singer of later period, V. N. Sundaram rendered his best song in Malayalam ‘Aaararivoo nin maya leelakal...’

Will be remembered: As the first film on the legend of Lord Ayyappa and Sabarimala. The debut film of Kottayam Shantha and for the music, especially for the lullaby ‘Swargam kaninju jagathinnu thanna...’
Posted by Ajay Menon at 11:53 AM No comments: