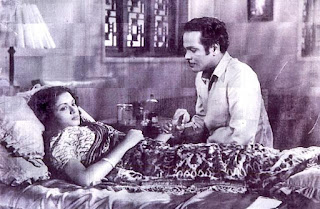 SOCIAL THEME Padmini and K. R. Ramaswamy in a scene from ‘Kanchana'


Produced by Sreeramulu Naidu under the banner of Pakshiraja Studios in Malayalam, Tamil and Telugu, ‘Kanchana' was the screen version of a popular Tamil novel ‘Kanchanayin Kanavu', authored by Tripurasundari, popularly known by her pen name ‘Lakshmi'. The novel serially published in the Tamil weekly ‘Ananda Vikatan' got widespread acceptance and appreciation from the readers for the morals it conveyed. The popularity of the novel prompted Sreeramulu Naidu to produce the film based on this story. All the three versions did well at the box office. The Malayalam version, released in October 1952, was a huge hit.

Prominent stars from Tamil, Malayalam and Telugu were part of the starcast. The legendary singing star K. R. Ramaswamy, and others like Miss Kumari, Padmini, Lalitha, Aranmula Ponnamma, M. N. Nambiar, P. A. Thomas added value to the film.

The film was shot at the splendid sets of the Pakshiraja Studios. Directed by Sreeramulu Naidu, the camera was handled by the renowned cameraman Sailen Bose. The dances choreographed by Guru Gopinath was an added attraction. Music composed by S. M. Subbiah Naidu dispensed with the practice of imitating popular tunes.

The film threw light on some social evils of the time like polygamy, injustice and discrimination towards women etc. The dialogues penned for the Malayalam version by Munshi Paramu Pillai, along with Manikyam, was impressive. The film dispensed with the usually irrelevant comic scenes.

Pushpanathan (K. R. Ramaswamy) takes over as Zamindar of Mathur. His widowed mother Ponnammal (Aranmula Ponnamma) wants her son to lead a peaceful life looking after the agricultural lands owned by the family. But Pushpanathan is persuaded by his college mate Manohar (M. N. Nambiar) to start a textile mill. Manohar's wicked eye is on the wealth of Pushpanathan.

Manohar introduces Pushpanathan to a dancer in the city, Bhanumathi (Padmini). Daughter of a prostitute Bhanumathi leads a honourable life, quite against the wish of her mother. Bhanumathi is in love with Pushpanathan. Manohar manages to manipulate and divert Pushpanathan's wealth in the cover of the setting up the textile mill.

Neelamegham Pillai (K. Doraiswamy), the former accountant of the Mathur Zamindar, now lives in utter poverty, struggling to bring up his grand children Kanchana (Lalitha) and Sabeshan (P. A. Thomas), who is studying for Medicine. Pushpanathan comes to help the old servant of his family and he becomes enamoured by Kanchana. Shortly afterwards, Pushpanathan weds Kanchana. He assures Bhanumathi that his marriage will not affect his love for her.

Kanchana who had dreamt of a luxurious and happy life as the Zamindar's wife is ill-treated by her mother-in-law. And she is heart-broken when she comes to know of her husband's relationship with Bhanumathi.

The financial crisis caused by the borrowings for the construction of the textile mill and domestic worries disturbs Pushanathan's peace of mind. At this juncture a young lady doctor, Seetha (Miss Kumari) comes to Mathur. Pushpanathan is drawn to her. But Seetha is in love with Kanchana's brother and her college mate doctor Sabeshan.

Kanchana burns with suspicion and jealousy. To add insult to injury, Pushpanathan beats Kanchana in the presence of Seetha. Disapproving of Pushpanathan's amorous approaches Seetha leaves Mathur. Pushpanathan vents his anger against Kanchana, who, unable to take it anymore leave home. Pushpanathan does not allow Kanchana to take her son with her.

All the eight songs, penned by Abhayadev and tuned by S. M. Subbiah Naidu, became instant hits. A composition of Muthuswami Dikshithar , ‘Maye thwam yaahi...' in Tharangini raga and sung by M. L. Vasanthakumari became a super hit. Another composition of Dikshithar in Kalyani raga and sung by Vasanthakumari, ‘Shivakameswari...' also became a hit. The romantic number, ‘O! Vaanin mele...' (P. A. Periyanayaki) and a prayer song sung by Radha-Jayalakshmi, ‘Charana Pankajam...' were the other popular hits. Other songs that impressed were ‘Vela cheyyu...' (Radha-Jayalakshmi) and ‘Nirasha mathram aayi...' (Periyanayaki).

Will be Remembered: As a successful socially relevant film; as the only Malayalam film in which the legendary Tamil star K. R. Ramaswamy starred and for its excellent music.
Posted by Ajay Menon at 3:27 PM No comments:

Email ThisBlogThis!Share to TwitterShare to FacebookShare to Pinterest
Labels: Kanchana 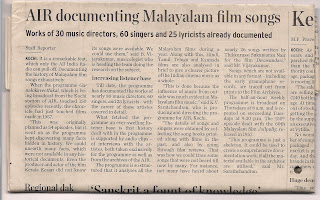 Email ThisBlogThis!Share to TwitterShare to FacebookShare to Pinterest
Labels: Ganalokaveedhikalil, The Hindu

KOCHI: It is a remarkable feat, which only the All India Radio can pull off. Documenting the history of Malayalam film songs exhaustively.

When the programme Ganalokaveethikal, which is being broadcast from the Kochi station of AIR, touched 150 episodes recently, the chronicle had just touched films made in 1957.
“This was originally planned as 54 episodes, but it went on as the programme kept discovering many facts hidden in history. We could unearth many facts, which were not available in any historical documents. Even the producer and actor of the film Kerala Kesari did not know its songs were available. We could use them,” said B. Vijayakumar, musicologist who is heading the team doing the research on the subject.

Till date, the programme has documented the works of nearly 30 music directors, 60 singers, and 25 lyricists – with the career of these artistes covered in detail.

What fetched the programme an ever-swelling listener base is that history dealt with in the programme is supported by audio clips – of interviews with the artistes, both taken exclusively for the programme as well as from the archives of the AIR.

The programme is so structured that it analyses all the Malayalam films during a year.
Along with this, Hindi, Tamil, Telugu and Kannada films are also analysed in brief to give a clearer picture of the Indian cinema music as a whole.

“This is done because the influence of musi
c from outside was much evident in Malayalam film music,” said K.V. Saratchandran, who is producing and directing the programme for AIR, Kochi.
“The details of songs and singers were obtained by collecting the song books printed along with films in the past, and also by going through film reviews. That was how we could trace some songs that were not heard till now by many. For instance, not many have heard about nearly 26 songs written by Thikkurussi Sukumaran Nair for the film Devasundari,” said Mr. Vijayakumar.

Songs, which are not available in any format – including the early gramophone records, are traced out from prints in the Film Archives.

The half-an-hour weekly programme is broadcast on Thursdays at 8 a.m. and is repeated on succeeding Tuesdays at 9.30 p.m.

The 150 th episode dealt with the 60th Malayalam film Jailpully, released in 1957.

“This programme is just a skeleton. It could be used to create a comprehensive documentation work, if all the material available in the archives are utilised,” said Mr. Sarathchandran.
Posted by Ajay Menon at 7:30 AM No comments: 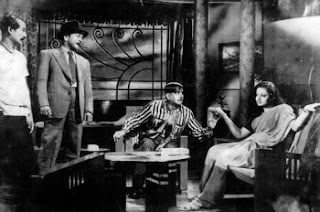 MULTILINGUAL:A scene from the film ‘Chandrika' produced simultaneously in Malayalam and Tamil

‘Chandrika' released on August 24, 1950 introduced to Malayalam cinema several eminent film luminaries, the most popular among them being lyricist P. Bhaskaran.

The film was simultaneously produced in Tamil also and released on September 29, 1950. ‘Chandrika' is considered the first multilingual film the original being Malayalam. Legendary Tamil stars like K. Sarangapani, T. S. Baliah and V. N. Janaki acted in both the versions.

Nagavalli wrote the dialogues for the story authored by noted dramatist N. P. Chellappan Nair. Dakshinamoorthy and Govindarajulu Naidu set to tune the lyrics penned by Bhaskaran and Thumpamon Padmanabhankutty. The name of Ambalapuzha Brothers, the nadaswaram exponents, have also been given credit in the titles. Probably, the nadaswaram duo might have conducted the orchestra for the film.

The film was shot at the famous Vauhini Studios. Camera was by N. C. Balakrishnan and editing by V. S. Rajan. Choreography was by the ‘Travancore Sisters' Lalitha, Padmini and Ragini who performed the dances also along with another dancer named Sakkubai. The dance drama ‘Sakunthalam' was an added attraction.

In spite of the presence of popular stars of both Tamil and Malayalam cinema, the film failed. Both the versions did not do well at the box office. The theme was an oft repeated one, the film had nothing new, and the unusual twists and turns in the story was nothing short of boring. The weak storyline is considered a main reason for the poor performance of the film.

Chandrika (Sethulakshmi), the only daughter of the rich industrialist Janardanan Pillai (K. N. Gopalan Nair) falls in love with Gopi (Thikkurissi), the son of the maid servant. Gopi is aware of his social status and keeps away from Chandrika. But Chandrika does not leave him. Chandrika's cousin Remani (Bharathi) also loves Gopi. When Pillai comes to know about his daughter's love affair with the servant maid's son, he becomes furious and expels both Gopi and his mother from the house. Radhamani (V. N. Janaki ), Pillai's niece plays all nasty tricks to turn Pillai against Gopi.

One night Gopi enters Pillai's house and is arrested by the police on false charges. Chandrika falls into depression, leading to lunacy, because of her failure in love and tragedy that befalls her lover. Dr. Radhakrishnan (Vikraman Nair) treats her.She is cured and nursed back to health. Chandrika marries Dr. Radhakrishnan.

Pillai's manager Shankar (T. S. Baliah) who also loved Chandrika and wished to marry her join hands with Radhamani who was in love with the doctor. They join hands and hatch a plot to wreck Chandrika's family life. They blackmail Pillai showing a letter written by Chandrika to Gopi. Professor Raan (Sarangapani) and Mohan (M. G. Menon) lend all support to the conspirators.

In jail, Gopi comes to know about the wicked plans of Radhamani and her group. Remani helps Gopi clear all misunderstandings. The charges framed do not stand and gets a release. Remani weds Gopi. Professor Raan weds Radhamani's sister Vimala (Malathi). Chandrika regains peace and happiness.

Thikkurissi, Vikraman Nair, Baliah and Sarangapani did justice to their roles. V. N. Janaki impressed in the negative role. The comic track involving S. P. Pillai failed to create a laugh. The sequences were mere repetitions from earlier films.

There were 11 songs penned by P. Bhaskaran and Thumpamon Padmanabhankutty. Some of the tunes composed by Dakshinamoorthy and Govindarajulu Naidu became hits. ‘Kezhuka athmasakhi...' by Bhaskaran and sung by V. N. Sundaram was a huge hit. The song was an imitation of a popular C. H. Athma non film number ‘Preetam aan milo...' composed by O. P. Nayyar. The other popular song in the film, written by Bhaskaran, was ‘Choriyuka madhumari nilaave...' (P. Leela). These songs were tuned by Dakshinamoorthy. Other hits from the film include, ‘Mullavalli mele vidarum...', ‘Nonthuyir vaadidum jeevithamey...' and ‘Jeevithanandam tharum...' (all sung by P. Leela and composed by Govindarajulu Naidu).

Will be remembered: As the first Malayalam film of lyricist P. Bhaskaran. As the debut film of actor P. K. Vikraman Nair and actress Sethulakshmi. The only Malayalam film in which V. N. Janaki acted and as the first film to be produced in more than one language simultaneously.
Posted by Ajay Menon at 3:25 PM No comments: