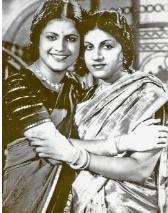 ON FRIENDSHIP Miss Kumari, left, and B. S. Saroja in the film

‘Atmasakhi’ was the first film produced by P. Subramaniam and the first to be shot at the famous Merryland Studios. This film company which Subramaniam established at Nemom, near Thiruvananthapuram, has the credit of having introduced many new artistes to Malayalam cinema. The most prominent among them was Sathyan. Though Sathyan first faced the camera in the film ‘Tyagaseema,’ a project that never saw the light of day, it was in ‘Atmasakhi’ that he made his debut. The glamour girl of the fifties, Kumari Thankam and N. R. Thankam, later known as Miss Chandni, entered films through ‘Atmasakhi.’

Also making their debut in this film were lyricist Thirunainarkurichi Madhavan Nair and music director Brother Lakshmanan. This was also the first film to be produced by Neela Productions.

The story, script and dialogues of ‘Atmasakhi’ were by K. P. Kottarakkara, who also acted in the film. The story of the film was in line with the then preferred formula of social films. The wicked step mother, ill treated children, g47ood hearted servants, were all there, along with the eternal love triangle. ‘Atmaskahi’ was dubbed into Tamil and released under the title ‘Priyasakhi.’

Raghu (Sathyan) and Leela (Miss Kumari), children of Chandrasekhara Pillai (Veeran), a wealthy landlord, lead a miserable life. Ill-treated and humiliated by their step mother Kamala (Pankajavalli). Their father is helpless, and the children do not get any love or care from him. The only consolation for the children is the family that stays close by. Raghu falls in love with the girl of that family, Santha (B. S. Saroja).

Raghu gets absolutely no support from his father when he decides to pursue medical studies. It is his friend Hari (K. P. Kottarakkara) who stands by him during that crucial phase. Kamala begins to play her dirty tricks to separate Raghu and Santha and also to turn her husband against them. At college, Indira (Kumari Thankam), unaware of Raghu’s affair with Santha, nurses an affection for him. This completes the love triangle.

In the meantime, Santha’s mother dies and she leaves home in search of Raghu. The story from now on races to a climax. Santha falls into the hands of ruffians but is saved in the nick of time by Indira and Hari. Santha becomes a nurse. Mohan (M. N. Nambiar), the wicked son of Kamala, is shot dead by his own mother by mistake. Kamala turns insane; Raghu marries Santha, while Leela weds Hari; Kamala is back to normal, reformed, providing a happy ending to the film.

Most of the 13 songs of the film were imitations of popular Hindi and other language film songs. Most of these songs have faded into obscurity. The lyrics of the imitated songs did not gel with the tunes in most cases. One such song, imitation of an immortal Marathi song composed by Vasant Desai in Lavni style, ‘Lat pat lat pat......’ for the film ‘Amar Bhoopali’ sung by Lata Mangeshkar and chorus, sung in ‘Atmasakhi’ by N. L. Ganasaraswathi and beginning ‘Jayam jayam sthana jayam...’ failed to create an impact. So was the fate of the other imitations.

But one of the songs, in spite of being an imitation of a very popular Hindi film song, became a hit. The song, ‘Aa nila vaanilen aashakal, kaniyidum tharake...’ rendered by P.Leela and T. A. Mothi was a direct imitation of the Hindi song ‘Duniya hamare pyar ki...’ from the 1949 film ‘Lahore’ sung by Lata Mangeshkar and Karan Dewan.

Email ThisBlogThis!Share to TwitterShare to FacebookShare to Pinterest
Labels: Aathmasakhi

Landmark movie Padmini and Sathyan
Released on December 30, 1954, this was a New Year gift to the Malayali. One of the most successful films produced by the thespian T. E. Vasudevan, the USP of ‘Snehaseema’ was a strong social theme and some wonderful music. The plot revol ves around Johny (Sathyan), an orphan raised by a Christian priest who works as a teacher in a private management school. Omana (Padmini), the daughter of the manager of the school, falls in love with Johny. This leads to their wedding, quite against the wishes of Omana’s father. Johny resigns from the school and joins the army. Meanwhile, Omana give birth to a baby girl. War breaks out and Johny is reported to be killed at the front. Despite protests, Omana is forced by her father to marry Doctor Baby (Kottarakkara Sreedharan Nair). This was an alliance that her father proposed before Omana’s marriage to Johny. The story takes a twist when it is known that Johny is not dead and the news that was floated was by some mistake. Johny returns home to find Omana married again. Suffering a huge setback Johny attempts to commit suicide. Doctor Baby tries in vain to save him. The heart-broken Omana also succumbs to death.

Written by Ponkunnam Varkey, noted for his attacks against the church and its orthodoxy, it lays bare the laws and practices that the community had to suffer from. One of the Draconian laws pertaining to marriage and remarriage is what is discussed in this film. Ponkunnam Varkey made a bold attempt to correct such unjust laws.

The film’s storyline often appears to be an adaptation of Lord Tennyson’s story poem ‘Enoch Arden,’ Elizabeth Gaskell’s historical novel ‘Sylvia’s Lovers,’ especially the melodrama element, and Adelaide Anne Procter’s poem, ‘Homeward Bound.’ ‘Snehaseema’ also had close resemblance to the Noor Jehan- starrer, Pakistani film, ‘Dupatta,’ which was released in March 1952. In fact, prior to the 1965 Indo-Pak War, Pakistani films were released in India also. ‘Dupatta,’ a musical hit, with the sweet melodies by Noor Jehan and music by Firoze Nizami was a box office hit in India too.

V. Dakshinamurthy, who composed the music for the film, dispensed with the practice of imitating other language film tunes, though not fully. The music composer successfully blended Carnatic music with Christian devotional tunes. The song, ‘Kanivolum kamaneeya hridayam…’ rendered by P. Leela is based on Sankarabharanam raga. This composition is identified by musicologists as the first Christian devotional in a Carnatic raga. Dakshinamurthy composed another song in this film which was a blend of the choir and western tune. ‘Adhawanikunnavarkum bhaaram chumakunnorkum…’ sung by P. Leela and chorus also became popular. Another song, a lullaby, ‘Kannum pootti uranguka neeyen...’ by P. Leela and A. M. Raja, remains the most sought after number from this film.

Sathyan, Kottarakkara, and Padmini came up with brilliant performances. The dialogues by Ponkunnam Varkey gave the film a strong social reformist touch. Encouraged by the success of the film, ‘Snehaseema’ was dubbed into Tamil. The film ‘Punyavathi’ had a good run in Tamil Nadu. Will be remembered: The film developed a reputation and enduring appeal mainly for its secular credentials. Snehaseema will also be remembered for its evergreen songs and soulful music.
Posted by Ajay Menon at 11:07 PM No comments: