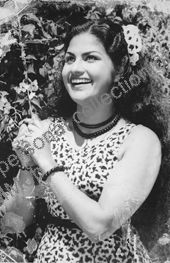 
‘Aana Valarthiya Vaanambaadi,' produced by Neela Productions and released in 1960 was the first action movie with jungle as the main plot. The grand success of this film paved the way for several other films in this genre. P. Subramaniam who produced and directed this film at a time when films with this theme were seldom produced in South India. ‘Vanamala' (1951), the first Malayalam film in this genre, was a flop.

Action films with forest as the main plot and scenes involving the heroes and heroines vanquishing the wild animals fascinated the audience since the early days of Indian cinema.

It is quite interesting to note that ‘Aana Valarthiya Vanambaadi' produced simultaneously in Malayalam and Tamil included in its starcast some of the prominent stars of that time, like the legendary S. D. Subbalakshmi, D. Balasubramaniam , M. N. Nambiar, C. K. Saraswathi, Friend Ramaswami etc. from Tamil cinema and Thikkurissi, S. P. Pillai, Santhi, etc. from Malayalam cinema. The hero of the film Sreeram was from Tamil cinema, and the heroine Miss Kumari from Malayalam.

I was quite strange that the Tamil version of the film, ‘Yaanai Valartha Vaanambaadi' (1959) was released long before the release of the Malayalam version (1960). The screening of the Tamil version in Kerala did not affect success of the Malayalam version. The film was dubbed to Telugu under the title ‘Jungle Rani' and to Kannada as ‘Vanarani'. Both the versions met with success.

The main attraction of the film was a chimpanzee named Pedro and an elephant named Bheeman. The grand success of this jungle film encouraged the producer to make more films under this genre, like ‘Kaattu Maina' (1963), ‘Kaattu Mallika' (1966), ‘Aaana Valarthiya Vanambadiyude Makan' (1970), ‘Kaadu' (1973) etc.

The story of the flm was inspired by the fictional character Tarzan created by Edgar Rice Burroughs and the jungle series films produced earlier in Hindi and Tamil.

Lakshmi (Miss Kumari) along with her infant daughter take a flight to Singapore to join her husband Selvapathi (Thikkurissi) who is an estate owner there. The plane crashes and all the passengers, except the infant daughter of Lakshmi lose their lives. The child clad in a thick blanket lands in a forest somewhere in Kerala. Aadhiappan (Pedro), a chimpanzee finds the child on the top of a tree and takes the child to his master in the forest, Dharmarajan (D. Balasubramaniam) who had made the jungle his abode being fed up with city life.

The child is named Malli and is brought up by Dharmarajan as his own daughter. Malli grows up in the jungle playing with Aadhiappan and Bheemarajan, an elephant. Selvapathi returns home and he brings up his sister Saraswathi's (S. D. Subbalakshmi) son Shekhar (Sreeram). Time goes by. Malli (Miss Kumari) grows up and Shekhar becomes an investigating officer. The chief of the bandits operating in the forest is after Malli. Shekhar is deputed to capture the bandits and bring them before law. In the jungle Shekhar meets Malli and falls in love with her. Dharmarajan does not approve of their love affair. After several twists and turns in the story, the bandits are captured by Shekhar. Dharmarajan's hut in the jungle catches fire and all believe that he is killed. Shekhar takes Malli and Aadhiappan home.

Mohana (Shanthi), daughter of Selvapathi's brother Arunachalam (Friend Ramaswamy) is in love with Shekhar. But Mohans's mother Angamuthu (C. K. Saraswathi) wants to give her daughter in marriage to Azhagasundaram (M. N. Nambiar). The story takes strange twists. Dharmarajan rerturns to the city to meet Malli. They then come to know from Dharmarajan that the chief of the bandits, who had escaped, is none other than Azhagasundaram and that Malli is the daughter of Selvapathi. Azhagasundaram is punished for the crimes committed by him. Shekhar marries Malli.

Miss Kumari excelled in the "Lady Tarzan " type role. Sreeram who had acred in a few Tamil films of early 1950s as hero performed his adventurous role well. S. P. Pillai created a laugh with his comic scenes especially those involving the wild animals.

The film was edited by K. D. George. The scenes shot at Merryland Studios and in a forest were very professionally edited. The major portion of the film was shot in the studio. Camera work by N. S. Mani also good. The scenes involving fights with the wild animals was effectively captured.

The seven songs penned by Thirunainar Kurichi Madhavan Nair were tuned by Brother Lakshmanan. Some of the songs became hits. The duet by A. M. Raja and P. Leela, ‘Paimpaal ozhukum chola thannil...', the lullaby by Raja ‘Kanney varna malar kodiye...' and a solo by Leela ‘Kaananamey kanninaanandame...' became super hits.

Will be remembered: As the first jungle film produced by Neela Productions and also as the first successful Malayalam film in this genre, though the first film in the language was ‘Vanamala," which did not succeed. For the songs, particularly ‘Kaananame kanninaanandame...' Also as the only Malayalam film enacted by the legendary Tamil stars, S. D. Subbalakshmi and D. Balasubramaniam.
Posted by Ajay Menon at 3:16 PM No comments:

TRENDSETTER ‘Bhargavi Nilayam’ was the first ghost film in Malayalam

This first ghost story film in Malayalam is 45 years old. Released on November 22, 1964, the film confirms the existence of supernatural powers unlike some of the early Indian films in this genre.

Even suspense thrillers of the later period, which can also be classified under the ‘ghost story’ group did not deal with ‘real’ ghosts. For example Hindi films like ‘Bees Saal Baad’ (1962), ‘Woh Kaun Thi’ (1964), ‘Kohra’ (1964) had heroines in disguise as ghosts. But in ‘Bhargavi Nilayam,’ the audience, for the first time in Indian cinema, were told about the existence of the supernatural .

This ghost film was developed from a short story, ‘Neela Velicham,’ by Vaikom Mohammed Basheer, which was included in his short story compilation titled ‘Paavappettavarude Veshya’ published in 1952. The script and dialogues of the film was written by the novelist himself. The film was a huge box office hit. The film marked the directorial debut of noted cinematographer A. Vincent. It was noted for its camera work by P. Bhaskar Rao that gelled well with the script. But the highpoint was the haunting music by M. S. Baburaj.

An enthusiastic and talented novelist (Madhu) comes to stay in a desolate mansion named ‘Bhargavi Nilayam.’ The novelist and his servant Cheriya Pareekkanni (Adoor Bhasi) experience the presence of a strange entity here. They come to know from the local people that it is a haunted house. The story is that it is haunted by the ghost of the daughter of the previous owner. The novelist and his servant encounter strange happenings here - the gramophone plays on its own, objects move around. The novelist finds some old letters written to Bhargavi (Vijaya Nirmala) by her lover Sasikumar (Prem Nazir). It is believed that the ghost of Bhargavi now haunts this house.

The letters give some indication about their love affair and their tragic death. The novelist decides to probe the matter. He starts writing the story of Bhargavi. The information gathered from the local people and the hints in the letters help him in his writing. The story develops. Bhargavi falls in love with her neighbour Sasikumar who is a talented poet and singer. Bharagavi’s father’s nephew, Nanukuttan (P. J. Antony) is also in love with Bhargavi. But Bhargavi hates Nanukuttan who is a wicked wastrel. Nanukuttan tries all nasty tricks to separate the lovers. He kills Sasikumar. Bharagavi becomes furious when she comes to know of her lover’s murder. In a scuffle Nanukuttan pushes Bhargavi into a well, killing her. Nanukuttan spreads the news that Bhargavi had committed suicide.

The novelist reads out the story to the ghost who by now has become quite compassionate with him. Nanukuttan overhears the story. He fears that once the story is published the truth behind the death of Bhargavi and Sasikumar will be out. He attacks the novelist and a fight ensues. Both of them fall into the well in which Bharagavi was drowned. The novelist is helped by the ghost but Nanukuttan is killed. This is Bharagavi’s revenge.

Madhu excelled in the role of the novelist. Prem Nazir was at home in the role of a romantic hero. P. J. Antony was stunning as the ruthless Nanukuttan, while Adoor Bhasi provides some light moments with his comedy. Pappu, who later became popular as Kuthiravattom Pappu was cast in a small comic role. His character was called ‘Kuthiravattom,’ a name that stuck for the rest of his career. Vijaya Nirmala excelled in what probably was her first major role.

Will be remembered: As the first ghost film in Malayalam. The only film for which Vaikom Mohammed Basheer wrote script and dialogues. As the first Malayalam film of Vijaya Nirmala, for its wonderful music, and for the directorial debut of A.Vincent.
Posted by Ajay Menon at 9:41 AM 1 comment: 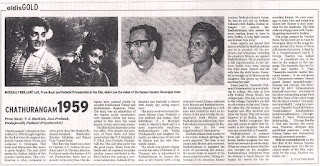 Posted by Ajay Menon at 7:34 AM No comments: