Epoch making Sathyan and Kumari Thankam in a still from ‘Thiramala’
‘Thiramala’ has a significant place in the history of Malayalam cinema. It introduced rich orchestration, and also some artistes and technicians who made a name for themselves in later years.

Music director Vimal Kumar, singer Shanta P. Nair, Adoor Bhasi, Valsala Menon, as child actor, Ramu Kariat who worked as assistant manager of the unit, director Sasikumar who played the role of a hotel manager, Thomas Burleigh and Hindustani classical singer Lakshmi Shankar, made their Malayalam debut in this film. The film was based on a short story ‘Choondakkaran’ written by T. N. Gopinathan Nair who wrote the script and also acted in a major role.

Their love blooms much against the wishes of Kurup. He succeeds in pressurising Lakshmi into marrying Vijayan (Sathyan) a city wastrel. Venu leaves the village and finds a waiter’s job in a city hotel.

Vijayan and Lakshmi happen to stay in the same hotel where Venu is employed. Vijayan leads an immoral life making Lakshmi’s life miserable. Venu remains a silent witness to the break up of their marriage.

Meanwhile, Vijayan falls into the net cast by hotel dancer Swapna Latha and loses all his wealth. Lakshmi gives birth to a child, which dies. A remorseful Vijayan leaves the city in search of Lakshmi. Venu, who had also returned to the village, meets Lakshmi in a trying circumstance. Waiting to be taken across the swollen river during a raging storm Lakshmi is helped by Venu. Just when he sees Lakshmi safely to the other shore Venu is thrown into the river and is drowned. The film ends with a frame focussing on the corpse of Venu, which is washed ashore.

‘Thiramala’ was screened in various territories of the state with a different climax. In the Malabar region, the film had a happy ending with Lakshmi saved from the storm by Venu, who entrusts her to Vijayan. In the Southern region, the film ends with Venu’s death.

The film had 13 songs, most of which were imitations of popular Hindi tunes. Bhaskaran Master’s lyrics blended well with the tunes. The film is considered by musicologists as the first musical hit in Malayalam. The song ‘Hey kaliyodame poyalum nee sakhi...’ (Abdul Khader-Shantha P.Nair), a direct imitation of the immortal Hindi song ‘Kyon unhen dil diya...’ composed by Naushad for the film ‘Anokhi Ada’ (1948) is popular even today. The dance number sung by Lakshmi Shanker, ‘Vanamulla maala vaadi...’ and the pathos song ‘Tharakam irulil marayukayo...’ sung by Abdul Khader were also very popular.

Will be remembered: As the film which introduced eminent artistes and technicians. It will also be remembered for the songs, orchestration and for the different climax scenes.
Posted by Ajay Menon at 11:26 AM No comments:

Email ThisBlogThis!Share to TwitterShare to FacebookShare to Pinterest
Labels: Thiramala 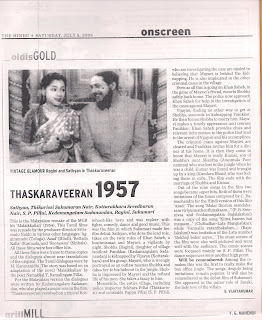 Posted by Ajay Menon at 7:28 AM No comments: