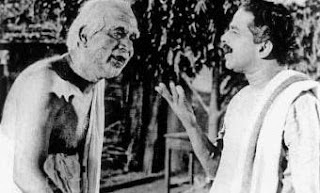 CLASSIC MULTI-STARRER Kottarakara Sreedharan Nair, left, and Sathyan in ‘Aranazhikaneram'
‘Aranazhikaneram' is widely considered as one of the best Malayalam films with a Christian family background. The film was true adaptation of the novel of the same title by K E Mathai, popularly known as Parappurath. The novel was a bestseller and bagged several awards. The screen version of the novel also was a huge hit.

To add to the spirit and ambience the film was released on the Christmas Day. It is considered as one of the best works of director K. S. Sethumadhavan. The multi-starrer had leading stars like Kottarakkara Sreedharan Nair, Sathyan, Prem Nazir, K. P. Ummer, Adoor Bhasi, Ragini, Sheela, Ambika cast in important roles.

The dialogues were written by Parappurath, who also played a minor role in the film. Another feature of the film was that popular comic stars like Adoor Bhasi, Bahadur and Sankaradi were cast in important character roles.

The story revolved round an orthodox Christian family headed by the octogenarian Kunjonachan (Kottarakkara) who lives his life by The Book. Kunjonachan stays with his son Mathukutty (Sathyan), a politician. Mathukutty's son Rajan (Prem Nazir) by his first wife is in military service and the family survive on the money he sends. Mathukutty's second wife Deenamma (Ragini) nurses and takes care of Kunjonachan and the old man in extremely fond of her.

Kunjonachan's other children are Geevarghese (Sankaradi), a small-time businessman who always complains of being neglected by his father, Kunju Cherukkan (Bahadur) a farmerwho lives in utter poverty and survives on what his son who works in Bombay sends him and Philippose (Govindankutty) a wealthy estate owner who lives in the same village but offers no help to his brothers.

Rajan comes on his annual leave. He meets and falls in love with Santhamma (Sheela). The family oppose the marriage citing scandals about Santhamma's widowed mother. But Rajan is firm and the marriage takes place with the blessings of Kunjonachan. Meanwhile, Geevarghese is reluctant to marry off his daughter Kuttiamma (Ambika), a teacher in the village school; because he fears that he will lose the money she gives him every month. Kuttiamma is in love with Thomas (Ummer), her colleague. Kunjonachan conducts their marriage.

Rajan dies in an accident at the military camp. The family go through a string of setbacks. Philippose's son Johnykutty (Prem Prakash) marries a labourer in the estate, Philippose's wife Annamma (Meena) turns mad, Kunju Cherukkan's son Danny (Jessey) is arrested on charges of smuggling and Kunjonachan, who believes that the death is ‘only half an hour away' suffers a heart attack and is bedridden. The doctor advises him not to stop his habit of consuming opium all of a sudden. The opium is brought by Sivarama Kurup (Adoor Bhasi), a regular to Kunjonachan's house.

One day Kunjonachan finds his daughter-in-law Deenamma and Kurup in a compromising position. Kunjonachan is shocked, he falls down and loses his power of speech. In his fear that Kunjonachan will spill the beans on their illicit affair, Kurup mixes poison in the opium served to Kunjonachan. The kind-hearted old man dies. In an act of repentance Deenamma also consumes the poisoned opium and dies bringing the film to a tragic end.

Kottarakkara excelled in the role of Kunjonachan. Film critics consider this performance as more impressive than his much acclaimed Chembankunju in ‘Chemmeen'. All other artistes impressed. Special mention must be made of Adoor Bhasi who was outstanding in the negative role.

The excellent music, composed by G. Devarajan and the five songs penned by Vayalar Rama Varma was a highpoint of the film. All the songs became instant hits. A prayer song, ‘Samayamam rathathil njaan …' (P. Leela-Madhuri) gained much importance. It is now widely used as a dirge. This song has an interesting story behind it. The song was written by a German missionary, Rev.Fr Volbrecht Nagel in 1904 while he was a parish priest in Malabar region. Vayalar modified the song by changing a few words, but keeping the feel and idea of the original intact. The original song written by Fr. Nagel is said to have been inspired by an old spiritual written by Wallace Willis in the 1860s, ‘Swing low sweet chariot...' And another interesting fact is that the tune of the Malayalam song from the film resembled the American Western folk ballad ‘Oh My Darling Clementine...' Fr. Nagel's prayer must have been in circulation much before its was included in ‘Aranazhikaneram.' But it gained popularity as a dirge only after it was included in the film.

Will be remembered: For the brilliant acting by Kottarakkara, for the music, especially for the dirge ‘Samayamam rathathil...' and as a film that swept the State awards in 1970 .
Posted by Ajay Menon at 9:34 AM No comments: 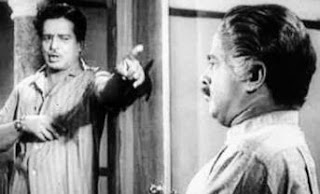 CLASS ACT Sathyan, who impressed in a double role, in a scene from the film ‘Kadalpaalam'
‘Kadalpaalam' was a very popular professional play authored by the renowned dramatist K. T. Mohammed. The play, with a social theme, was written in early 1960s for the Kollam-based troupe Kalidasa Kalakendram and staged throughout the state and outside before being published in book form in 1965. The book was also a best seller.

The wide popularity of this family drama prompted M. O. Joseph to produce the screen version of the play. It was produced by Manjilas and used the same title. It is considered as one of the most successful screen adaptations of a stage play in Malayalam. Directed by K. S. Sethumadhavan, the script and dialogues were written by K.T. Mohammed. The film won for KT the Kerala State Film Award for best dialogue in 1969. The camera was by Melli Irani and editing by M. S. Mani.

The play had a pier (kadalpaalam) prominently visible through the windows of the mansion. It is here that the important incidents in the story take place. The film also used a pier as a very symbolic property. It symbolised the life of the central character, the central theme of the film. The pier allows traffic only from one side unlike the common bridges. The story line matched with the symbol and this was a very novel experience. The film was successful in projecting the idea behind such a symbol through impressive dialogues.

Popular stars of the time starred in the film. Sathyan acted in double role; as the stubborn father and the equally rigid son who fights against the injustice of his father. Prem Nazir, K. P. Ummer, Bahadur, Sheela , Jayabharathi, Adoor Bhavani etc. were the other popular stars who acted in the movie.

The story revolves round the family of Narayana Kaimal (Sathyan), a leading advocate who loses his eyesight. Kaimal is a strict disciplinarian and always tries to impose his thoughts and principles on his children and fellow beings. This creates a conflict with others. Kaimal's elder son Raghu (Sathyan) dislikes the obstinate nature of his father leading to constant conflicts between the two. Kaimal's younger son Prabhakaran (Ummer) who is an advocate and daughter Geetha (Jayabharathi) try to obey their father, but at times they only pretend to obey him. Kaimal now sees the world through the eyes of his faithful servant Appu (Bahadur).

Prabhakaran is in love with Sarala (Sheela), daughter of Kaimal's servant Sreedharan Pillai (Sankaradi). Geetha is in love with Murali (Prem Nazir), the adopted son of Kadeeja (Adoor Bhavani), who lives in the neighbourhood. Appu is warned against telling anything about the love affairs to Kaimal. Raghu believes that they lost their mother at very young age only because of the arrogance of their father. Raghu is married to Prashanthi (Vijayachandrika) who was his father's choice.

Raghu shows his protest by his rude behaviour towards his wife. Kaimal demands to give back the tile factory which he had given to Raghu. But Raghu refuses to part with the factory. Kaimal files a court case against his son.

Geetha marries Murali and Raghu supports them. Kaimal regains his eyesight and is thunderstruck to know about the happenings that took place while he was blind. He decides to pretend to be blind so as to know more about his children. Only Appu is aware that Kaimal is now not blind. Kaimal plots to stop the marriage of Prabhakaran. He offers partnership of the factory to the manager Nanukuttan Nair (Adoor Bhasi) if he could help conduct the marriage of his son, who is a police inspector, with Sarala. Nair agrees to carry out the crooked plan.

The verdict of the court goes against Kaimal. But Prabhakaran hides this from his father. Prabhakaran does not allow Geetha to meet Kaimal and when Kadeeja come and raises voice for justice, Kaimal hits her. Murali attacks Kaimal and now all come to know that Kaimal is not blind. Prabhakaran comes to know about the crooked plan of his father. All the children turn against Kaimal. Unable to stand the setback and the thought that he had failed in his attempts to control his children with an iron hand he suffers a heart attack and dies.

Sathyan excelled in his double role. The film dispensed with comic scenes. Deviating from their usual comedy roles, Bahadur and Adoor Bhasi performed character roles in the film. Bahadur's performance as the faithful servant who is under pressure to act against his conscience is considered as one of the best he has essayed. Prem Nazir, Sheela, Jayabharathi and Adoor Bhavani also performed their roles impressively.

In the 1940 Hindi film ‘Prem Nagar', produced and directed by Mohan Dayaram Bhavnani, there is a similar situation. The hero of the film becomes blind and regains the eyesight subsequently. He pretends to be blind to test the real attitude and behaviour of others towards him. This box office hit was the first film of music composer Naushad. The script and dialogues of the Hindi film was by the German screenplay writer Willy Haas, who was associated with world classics like ‘The Burning Soil' (1922), ‘Joyless Street' (1925) and ‘One Does Not Play With Love' (1926).

Four songs written by Vayalar Rama Varma were tuned by G. Devarajan. The music was excellent. All the songs turned super hits. The film introduced playback singer P. Madhuri and the song sung ‘Kasthuri thailamittu mudi minukki...' was an instant hit. This was the first Malayalam film of S. P. Balasubramaniam. He rendered the haunting solo ‘Ee kadalum marukadalum...' P Leela got the Kerala State Award for the best playback singer for the song ‘Ujjayaniyile gayika...' The folk-based duet sung by K. J. Yesudas and B. Vasantha, ‘Inney poy inney poy...' was another popular hit.

Will be remembered: As the debut film of singers P Madhuri and first Malayalam film of S. P. Balasubramaniam. For the excellent music. And as a very successful screen adaptation of a stage play.
Posted by Ajay Menon at 9:31 AM