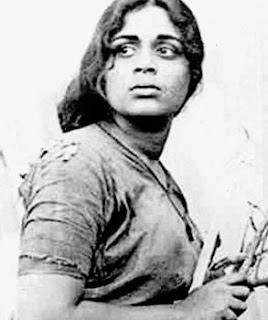 ON SOCIAL ILLS Kamaladevi in a scene from ‘Ezhu Rathrikal'


‘Ezhu Rathrikal,' the stage play authored by Kalady Gopi, was first published in book form in 1963. The book turned to be a best seller and the popular professional drama troupe, Changanasserry Geedha staged the play the very next year. The drama became very popular. It told the poignant story of the downtrodden.

The film version of the stage play ‘Thulabharam' authored by Thoppil Bhasi under the same title and ‘Ezhu Rathrikal' were released the same week. The former went to become a huge hit and bagged several awards also. The main characters in ‘Ezhu Rathrikal' were essayed by the same artistes who performed these roles on stage. Most of them were new to cinema. ‘ Thulabharam,' was a multi-starrer with most of the popular stars of the time like Prem Nazir, Madhu, Sarada, Sheela etc. in lead roles. The absence of ‘stars' is widely considered as one of the reasons for the failure of ‘Ezhu Rathrikal'.

The film was directed by Ramu Kariat. It was picturised at Arunachalam Studios, Kamal Bose cranked the camera, editing was by K D George and art direction by S. Konnanat.

The script and dialogues of the film, written by the playwright himself, closely followed the original text. The film followed the stage pattern, weaving together a number of melodramatic plots, realistic acting conventions and the theatrical device of enclosing disparate characters into a socially ambiguous space. The lack of a ‘cinematic touch' was again one of its glaring flaws. The highpoint of the film was the soulful music by Salil Choudhary.

The story revolved around a dilapidated house, with the dim street lights setting the ambience for the interaction of the characters. A number of vagabonds and social outcasts take shelter in this house every night. The film told the stories of these characters.

The popular stage actor Dominic, popularly known as Alummoodan came up with a brilliant performance as ‘Pashanam Varkey.' This is easily his best role in films. Varkey is a clever mendicant who exploits religious sentiments of people by carrying a board with the picture of a Hindu god on one side and that of a Christian saint on the other. K J Chacko, founder of Changanasserry Geedha, popularly known as Chachappan, did the role of Ikka. An old Muslim he is back from jail after being convicted for the murder of his wife. He is now in search of his daughter, earning his living selling musical instruments. Kamalamma who played the garrulous, lame ‘Chattukali' Maria on stage did well in the film too. Lata, the daughter of playback singer Santha P. Nair acted as the blind and orphan girl Seetha, who is tortured by ‘Udumbu' Govindan (Govindankutty). Seetha's only solace is Ikka, who protects her like her father.

J. C. Kuttikkat, stage actor, popular later as Jessey, the producer-director, did the role of Abu, the romantic young man. He has a story too. Abu is also back from jail after he tried to protect the father of his girlfriend Annamma (Kamaladevi). However, he loses his leg and also his girlfriend. While in jail he comes to know that Annamma is married to Kumaran (Nellikkodu Bhaskaran). A good singer, he lives by singing on the streets. Kumaran suspects that Annamma still has a sof corner for Abu and begins to ill-treat her. Life is miserable for her.

Another impressive character is the hunchback Paramu (Shihab). He is a scrupulous, honest man who fights injustice at his own level. He even shows the courage to attack ‘Udumbu' Govindan.

As the film rolls on it turns out that Seetha is Ikka's long lost daughter. This comes about when she sings a song that her father had taught her when she was a child. Ikka recognises his daughter but the happiness is short-lived. ‘Udumbu' Govindan kills Seetha bringing the film to a tragic, gory end.

The film attempted to tie up diverse narrative strands designed to give a picture of contemporary social problems. In fact, the drama did succeed in projecting social ills, like begging, lack of proper rehabilitation of prisoners freed after their conviction period etc. But the film did not create the needed impact.

Salil Choudhary's music was superb. All the five songs, written by Vayalar Rama Varma, became super hits. The solo by K. J. Yesudas, ‘Kaadaaru maasam, naadaaru maasam...' is one of his best in the language. Salil Choudhary, a pioneer in Chorus singing, created one of his best in this genre with ‘ Kaka karumbikale...' (Yesudas, Anto, Sreelatha, Latha). The other hits include ‘Rathri rathri...' (P. B. Sreenivas), ‘Panchamiyo pournamiyo...' (P. Leela) and ‘Makkathu poyi varum...' (Latha).

Will be remembered: As the debut film of actor Alummoodan and playwright Kalady Gopi. For its excellent music, particularly for the super Yesudas hit ‘ Kaadaaru maasam, naadaru maasam...'
Posted by Ajay Menon at 3:44 PM No comments:


The 100th Malayalam film, ‘Nithyakanyaka was released on February 22, 1963. The social movie was remake of the successful Tamil film ‘Ethirparathathu' (1954) produced by A. K. Balasubramaniam who also produced the Malayalam remake under the same banner ‘Sharavanabhava & Unity Pictures'. Sivaji Ganesan, Padmini and V. Nagaiah played the main roles in the Tamil film. The film was based on a story authored by C. V. Sreedhar who later went on to become a successful producer-director.

‘Nithyakanyaka' was probably the last in the series of films made on the same story. In 1956, the renowned director Yoganand came up with the Telugu version ‘Ilavelpu' with Nageswara Rao and Anjali Devi in lead roles. In 1957 the legendary producer-director L .V. Prasad made a Hindi version titled ‘Sharada' with Raj Kapoor and Meena Kumari cast in the main roles. The success of the Tamil, Telugu and Hindi versions must have prompted the producer to make a Malayalam version. When compared to the other language versions, ‘Nithyakanyaka' was only a moderate hit.

The renowned Malayalam novelist Ponkunnam Varkey wrote the dialogues for ‘Nithyakanyaka'. The film was frame-by-frame copy of the ‘Ethirparathathu'. The dialogues were impressive. P. Ramaswamy, who handled the camera for the Tamil film, also worked in the Malayalam film. In fact, it was his Malayalam debut.

Sathyan and Ragini played the lead roles in the film. Other popular stars of the time, Thikkurissi Sukumaran Nair, Kottarakkara Sreedharan Nair, Ambika, S. P. Pillai handled other important roles. This was the third directorial venture of the prolific Malayalam director K. S. Sethumadhavan; he had directed ‘Gnanasundari,' and ‘Kannum Karalum' before this. The music composed by G. Devarajan was the highpoint of the film.

Appu Menon (Kambissery Karunakaran), a primary school headmaster brings up his children Suku (Kottarakkara) and Lata (Ragini) amidst utter poverty. Suku becomes an advocate and weds his college mate Nalini (Ambika). Soon after the marriage, Suku leaves home with his wife and settles down separately leaving Appu Menon and Lata in penury. Appu Menon's dreams of a bright future for the family with the support of his son Suku crash.

Ravi (Sathyan), the only son of the rich landlord Vasu Kurup (Thikkurissi) stays in a portion of Appu Menon's house. Ravi is an engineering student in a nearby college. Ravi and Lata fall in love. Ravi promises Lata that he would approach her father with the marriage proposal once he completes his studies.

Meanwhile, Ravi gets a scholarship for higher studies abroad and leaves. News arrives that Ravi dies in an air crash. But the truth is that he is saved by some tribes from the scene of the crash. But Ravi loses his eyesight in the accident. Everyone back home believe that Ravi is dead.

A spendthrift, Suku borrows money from financiers. He also gets into bad company and indulges in heavy gambling. This leaves him in huge debt. Fearing action from the creditors he is forced to leave home. Nalini seeks refuge at Appu Menon's house. The death of Ravi leaves his father Vasu Kurup heartbroken. His friends and relatives ask him to marry and he agrees. Plans are afoot to marry him to Lata, who does not know that Vasu Kurup is Ravi's father. Both of them come to know of this only on the first night of their marriage. They decide to remain husband and wife only in the yes of the society, without any kind of physical relationship.

Unable to face the awkward situation Vasu Kurup goes on a pilgrimage. He finds his son Ravi in the holy town of Varanasi. Vasu Kurup brings his son home. Ravi undergoes a surgery and regains his eye sight. He is shocked when he finds that his stepmother is none other than his lover Lata. Kurup suffers a heart attack and dies.

Lata considers that she is a widow and refuses to marry Ravi, who is now her stepson. Suku, Nalini and other friends try hard to force Ravi and Lata into marriage. Ravi is troubled, while Lata decides to remain a ‘Nithyakanyaka,' a virgin for the rest of her life.

Sathyan, Ragini, Thikkurissi and others essayed their roles impressively. But the comedy scenes involving S. P. Pillai, Bahadur and Adoor Pankajam did not jell with the emotionally charged mood of the film.

The music was excellent. The seven songs in the film written by Vayalar Rama Varma were tuned by G. Devarajan. The memorable song ‘Kannuneer muthumaai...' was sung by K. J. Yesudas as well as P. Susheela separately. The one by Yesudas is considered one of the best this gifted singer has rendered.

The devotional number ‘Krishna Krishna Guruvayoorappa...' was pictured with some famous temples in the background.

The song tuned as a Ragamalaika, or a cluster of ragas, that included popular Ragas like Kaapi, Begada, Mohanam and Sindhu Bhairavi was another popular hit.

Will be remembered: As the 100th Malayalam film. For the excellent music, particularly for the unforgettable Yesudas number ‘Kannuneer muthumaai...'
Posted by Ajay Menon at 3:37 PM No comments: