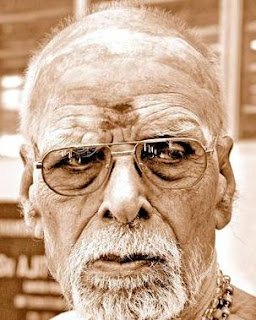 Early Malayalam cinema saw the entry of several popular stage artistes. Playback singing was not very popular and the singing stars from musical opera were preferred by film producers and directors. With the advent and popularity of cinema, ‘sangeeta natakam' began losing its prominence. Augustine Joseph and Manikuttan Nair, popularly known as Vaikom Mani, were two such singing stars who entered films through this film.

Augustine Joseph who formed the Udaya Kerala Natana Kala Samithi based in Kochi was noted for his Biblical, mythological and historical characters on stage. He was gifted with a melodious voice and was proficient in Carnatic music. The handsome actor's talents made him one of the most popular stars of musical opera. He also acted in the lead role in the Malayalam film ‘Velakkaran' (1953) and then went back to musical operas, never to come back to films again.

Vaikom Mani began acting from the age of 14. His singing and acting talents were recognised by Tamil cinema. He went on to act in films like ‘Daana Shoora Karnan' (1940), ‘Dharma Veeran' (1941) and ‘Krishnapidaaran' (1942). Songs sung by Vaikom Mani in the film ‘Dharma Veeran' turned big hits. Lyricist Sreekumaran Thampi is his son-in-law.

Music director V Dakshinamoorthy, who made his debut in this film, composed tunes for this venture along with Rama Rao, a noted Telugu music director. Most of the songs of ‘Nalla Thanka' were based on Carnatic ragas.

This was the second film produced at the Udaya Studios, the first being ‘Vellinakshathram' (1949) that failed at the box office.

The script and dialogues written by Muthukulam Raghavan Pillai followed the stage play with just minor changes. The camera was handled by A. Shanmugham and P. K. Madhavan Nair. The film was directed by P. V. Krishna Iyer.

Nalla Thanka (Miss Kumari), the only sister of Nallannan (Augustine Joseph), the King of Madhurapuri, is wedded to Somanathan (Vaikom Mani), the king of the neighbouring kingdom Ratnapuri. Alankari (Miss Omana), the wicked wife of Nallannan becomes envious of the prosperity of Ratnapuri and the happy married life of Nalla Thanka. Years pass and Nalla Thanka gives birth to seven children.

Drought strikes Ratnapuri and severe famine follows. Nalla Thanka leaves Ratnapuri with her children to seek the help of her kind brother. Nallannan promises all help. Alankari tortures Nalla Thanka. Nalla Thanka hides the misdeeds of Alankari from Nallannan as she does not want their family life to be disturbed.

Out of shame and grief, Nalla Thanka leaves her brother's palace. She decides to kill herself and her children. Nalla Thanka prays to Lord Shiva to forgive her for the decision. She throws her children one by one into a well. Lord Shiva descends and saves her life. All the children are brought back to life.

Nallannan comes to know about the misdeeds and cruelty of Alankari and she is banished from the country. Ratnapuri regains its glory. Nalla Thanka and Somanathan live happily with their children.

The performances of Augustine Joseph, Vaikom Mani, Miss Kumari and Miss Oamana were impressive. In fact, Miss Omana's character became so popular that the name Alankari became a synonym for a wicked woman. The special effect scenes was another highlight.

Music composed by Dakshinamoorthy was another highpoint. The songs were not free from the prevailing trend of imitations. There were 14 songs, written by Abhayadev.

The solo sung by Ms. Kuruvila, ‘Pathiye deivam, deivame pathiye...' owes its tune to the Telugu number, ‘Premamayamee jeevithamu...' sung by Nagiah and Sabu from the film ‘Sumangali' (1940. Music: Nagiah).

In spite of being imitations all these songs became hits. The Vaikom Mani- Leela romantic duet became an evergreen number in this genre.

The lullaby by Leela, ‘Amma than premasoubhagya...' is considered as the first popular lullaby in Malayalam cinema. Other hits from the film included ‘Sodara bandham athonne...' (Augustine Joseph), ‘Anandamaanake...' (Augustine Joseph & chorus) etc. A prayer song ‘Shambho njaan...' (P Leela) was composed as a ragamalika.

Will be remembered: As the debut film of music director V. Dakshinamoorthy, actors Augustine Joseph, Vaikom Mani, S. P. Pillai and actress Miss Omana, and cinematographer P. K. Madhavan Nair. And as the first mega hit in Malayalam cinema and for its good music.
Posted by Ajay Menon at 9:38 AM No comments:

Email ThisBlogThis!Share to TwitterShare to FacebookShare to Pinterest
Labels: Nallathanka 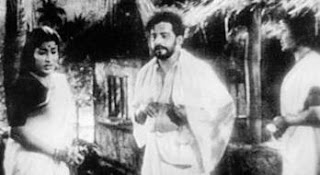 SUCCESSFUL STAGE ADAPTATION - From left, Ambika, Sathyan and Miss Kumari in a scene from the film
Released on December 22, 1961, ‘Mudiyanaya Puthran' was the first professional drama from a series of successful ones staged by Kerala Peoples Arts Club (KPAC) to be made into a film. Written by Thoppil Bhasi in 1957 and staged by KPAC throughout the country, the play won the Kerala Sahitya Academy award for best literary work in the drama category in 1959.

The popularity of the play prompted film producer T. K. Pareekutty to bring out a screen version of the play. He used the same title and was made by his own company, Chandratara Productions'. The film was director Ramu Kariat's first major venture. The dialogues were written by Thoppil Bhasi, camera was by A. Vincent and editing by G. Venkitaraman. The dances choreographed by C. Gopalakrishnan also impressed. The popular stars of that time, Satyan, Kottayam Chellappan, Ambika, Miss Kumari etc. added star value to the film. This was marked the debut of Adoor Bhasi. The film's success paved the way for screen versions of other popular KPAC plays like ‘Puthiya Aakasham Puthiya Bhoomi' (1962), ‘Aswamedham' (1967) etc. The story was about the relationship between a good and a bad brother and also about the the much discussed employer-employee relations. It involved some very melodramatic scenes, which was ignited by the strongly worded dialogue. The songs written by P. Bhaskaran were set to music by M. S. Baburaj.

Rajan (Sathyan) is a real terror in his village. Emotional setbacks in his life were responsible for his delinquent nature. Rajan was in love with Radha (Ambika) and they wished to get married. But their dream is not realised. Rajan's brother Gopala Pillai (Kottayam Chellappan) marries Radha. Neglected and deceived by his own brother, lover and family members Rajan turns delinquent. He is ordered out of his house by his mother (Adoor Bhavani). Gopala Pillai manipulates the situation and amasses a major portion of the ancestral property. He then breaks away from the family and settles to live along with his wife.

Rajan's mother and sister are reduced to penury. Their only source of help is Vasu (P. J. Antony), a labourer. Gopala Pillai becomes a rich contractor and is involved in all sorts of activities against labourers. This turns Vasu against Gopala Pillai. Meanwhile, Rajan attempts to molest Chellamma (Miss Kumari), a Harijan girl. Chellamma manages to escape the attempt but the incident stuns her.

Gopala Pillai still nurses an enmity with his brother. He suspects that his wife Radha was still in love with Rajan. Gopala Pillai decides to do away with Rajan. He hires a few goons and has Rajan beaten up severely. The timely help given to Rajan by Chellamma, who offers to give him shelter in her hut, saves him. Gradually Rajan regains his health. The love and affection showered on him by Chellamma and Vasu Vasu brings about a change in his character. Rajan even falls in love with Chellamma.

Vasu organises a labour strike against the unjust activities of Gopala Pillai and his men. Karadi Kuttappan (P. A. Thomas), one of Gopala Pillai's thugs is murdered in a conflict between the labourers and Gopala Pillai's men. Vasu is arrested and the police launch a search for Rajan who goes into hiding. Now Rajan thinks that the society and his family need Vasu more than him. Overcome by the affection that the people seem to have for Vasu, Rajan turns himself to the police. He entrusts Chellamma, whom he loves more than his life, to his mother.

The film is one of the best social movies in the language, which told boldly the real life struggles of workers, projected social evils like untouchability etc. Some of the emotionally charged scenes, like the climax where Rajan entrusts his beloved to his mother, and taking a cup of coffee from Radha, his sister-in-law, with whom he had misbehaved earlier were impressive.

The film was shot at Vijaya and Vauhini Studios. Vincent's remarkable camerawork sets the tone of the film right from the opening scene, in which Rajan lights a cigarette in the darkness and tries to molest Chellamma. His work is considered one of the best in black and white Malayalam cinema. Sathyan, P. J. Antony, Miss Kumari and Adoor Bhavani excelled in their roles. In fact, Sathyan's powerful performance as the delinquent younger brother in the family was later extended into the definitive element in Kariat's ‘Chemmeen'. A dance sequence by Ambika was another highlight of the film.

The film was noted at the national level and won the President's Silver Medal, for regional films, in 1961.

Will be remembered: As the first play by Thoppil Bhasi to be made into a film. The debut film of Adoor Bhasi and art director S. Konnanat. For Sathyan's brilliant performance and as the film to win the President's Silver Medal.
Posted by Ajay Menon at 9:36 AM No comments: