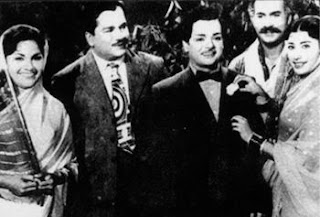 ‘Christmas Rathri,' produced and directed by P. Subramaniam under the banner of ‘Neela Productions' was released on January 28 1961, though it was planned to be released for Christmas 1960. The delay affected the collection. ‘Udaya Studios,' released their successful comedy film ‘Neeli Sali' during Christmas and this also had its impact on the verdict of the film. Perhaps if ‘Christmas Rathri' had been released as per schedule the results at the box office would have been brighter.

The story, written by T. N. Gopinathan Nair, had nothing to do with Christmas except that the climax of the film takes place on Christmas Eve. The dialogues by Muttathu Varkey were one of the main attractions of the film. The film was shot at Merryland Studios. The music by Brother Lakshmanan was another highlight of the film. It was in this film that lyricist P. Bhaskaran and Brother Lakshmanan go together. Probably, this was the only film for which they worked together.

The story revolves around Advocate George (Thikkurissi) and Annie (Miss Kumari). They are an unfortunate couple not blessed with children. The mental agony affects the health of George and he turns a chronic heart patient. He and Annie draw away from the society trying hard to hide their painful inner feelings.

Vareechan (Kottarakkara Sreedharan Nair) is a kind hearted landlord. He sends Dr. Mathew (T. K. Balachandran) to Europe for higher studies. Vareechan has an hidden agenda. He wants to give his daughter Gracy (Ambika) in marriage to Dr. Mathew. And Vareechan's plan becomes easy when Mathew and Gracy fall in love with each other.

Mathew's father had died by snake bite. His goal in life now is to pursue research in treatment for snake bite and invent anti-venom to save human lives. Mathew opens a dispensary in the city where his good old friend Advocate George and family reside. Mathew takes up the challenge of curing George's heart ailment.

Mathew's research progresses and he succeeds in inventing anti-venom. This proves to be successful on animals. He now wants to experiment this on human beings. Mathew who was immersed in his research was not able to attend to Vareechan or Gracy for sometime. Mathew's long silence makes Vareechan even more doubtful. He decides to conduct Gracy's marriage with another person. Gracy leaves home to escape from the marriage fixed against her wishes.

Mathew takes up the task of experimenting the anti-venom on humans in the presence of people and he chooses Christmas Eve for the event.

Advocate George decides to take revenge on Mathew for ruining his family life and for what he suspects undesirable relations with his wife Annie.

Gracy reaches the venue and offers herself for the anti-venom experiment. She is subjected to snake bite and is given an anti-venom injection. Gracy survives and human race gets a life saving remedy against snake bites. All dark clouds are cleared. Advocate George repents over his suspicion. Vareechan decides to conduct the marriage of his daughter Gracy with Mathew. The film ends praising the Lord and the glory of Christmas.

The title of the film was rather misleading. It had a religious connotation but the film had a social theme.

There were 12 songs in the film. Unlike earlier Neela films, this one dispensed with the trend of imitating popular Hindi or other language film tunes. The devotional number, ‘Nanma Niranjoramme, athi dhanye...' (P.Leela) is considered as one of the best songs in praise of Mother Mary. The song became a super hit and still remains popular. Other hits include the Christmas song ‘Unni pirannu…' (A.M.Raja, Leela), ‘Kinavinte thambalathil...' (A. P. Komala), ‘Kanmani karayalle...' (Leela).

Will be remembered: For the good music, especially for the devotional number, ‘Nanma niranjoramme...' by P.Leela. As the only film in which P. Bhaskaran and Brother Lakshmanan worked together as a team.
Posted by Ajay Menon at 3:22 PM No comments: 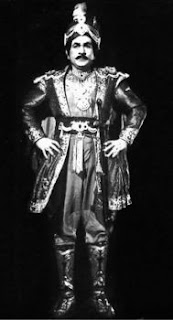 HISTORICAL Kottarakkara Sreedharan Nair in and as Pazhassi Raja

‘Pazhassi Raja,' released in 1964, takes us back to the 18th century. The film tells the story of Kerala Varma , the King of Pazhassi, who stood up against the unjust policies of the East India Company.

Produced and directed by M. Kunjacko under the banner of XL Productions at Udaya Studios, the film was probably the second historical movie in Malayalam. The first historical movie, ‘Veluthambi Dalava' (1962) was a box office hit. Kottarakkara Sreedharan Nair who had donned the role of Veluthambi was selected for the role of Pazhassi Raja. But ‘Pazhassi Raja' was not as successful as the former film. This was a time when Udaya Studios and Neela Productions competed against each other. Five days after ‘Pazhassi Raja' was released Neela came up with ‘Karutha Kai,' which went on to become a hit.

‘Pazhassi Raja' was shot entirely at Udaya Studios. Therefore some of the scenes, especially the war sequences, lacked technical perfection. The film demanded lavish sets but this could not be provided at the studio. Film historians believe that if the movie had been shot outdoors perhaps the result would have been different.

The noted Malayalam playwright P. Kunjanandan Nair, popularly known as Thikkodiyan penned the dialogues for the movie. This was one of the main attractions of the film. R. K. Shekhar who had worked as assistant to many music directors earlier, composed the music for the film. This was his first independent work. The music was another highlight of the film.

The story is set at a time when the East India Company was trying to establish its control and most of the city states in Kerala had surrendered to the company. Sankara Varma (Nanukuttan), king of Kurumbranad, had also surrendered. Kerala Varma (Kottarakkara Sreedharan Nair), king of Pazhassi and nephew of Sankara Varma, fought against the Company. Sankara Varma's niece Ammu Thampuratty (Rajasree, Gracy in the title cards) and nephew Unni (Boban) escape and seek refuge in Pazhassi Raja's palace.

Tipu Sultan invades Malabar in an attempt to bring the city states that surrendered to the Company under his control. Unable to fight with the ferocious troops of Tipu Sultan, the British decide to have a treaty with Pazhassi Raja with whose support they hoped to defeat Tipu Sultan. Pazhassi's guerrilla warfare succeeds. The British manage to free all the city states captured by Tipu Sultan.

Pazhassi's crafty uncle convinces the British authorities to allow him collect the taxes in Kottayam. He goes to declare that he is the real heir to the dynasty. Pazhassi Raja opposes this move. The British Commandant Wellesley (Satyapal) invites Pazhassi Raja to his bungalow to discuss the issue. Ammu Thampuratti and Unni who reach the bungalow in disguise inform Pazhassi about the treacherous plans of the British. When Pazhassi defies the British they try to arrest him. The Kurichya bowmen of Pazhassi defeat this ploy and rescue their king.

The British troops capture Pazhassi Raja's palace. The Raja and his military commandants and attendants, Kaitheri Ambu (Dr. Chandraguptan), Kannavathu Nambiar (Prem Nazir), Unni Moosa (Sankaradi) and the Kurichya leader Chandu ( Vincent Chacko) escape to the dense Puralimala forests from where they begin guerrilla warfare against the British. An official of the Company, Baber (Satyan), who reaches Pazhassi's hideout with the help of Pazhayam Veedan (Kottayam Chellappan) is beaten up and sent back with a warning.

The British decide to go all out against Pazhassi. A bitter struggle ensues. Pazhassi manages to recapture his palace. In the meanwhile Baber takes custody of Pazhassi's wife Maakkam (Sreedevi) and his infant son (Ponnumol). The war intensifies. The British try all nasty tricks to defeat the Raja. They even set his palace on fire. Finally, Pazhassi Raja's men are beaten. The ‘Lion of Kerala' as Pazhassi was popularly known, swallows his diamond ring and commits suicide.

Kottarakkara excelled in the role of the Raja. His commanding voice was a huge plus. Satyapal as Wellesley and Satyan as Baber also did justice to their villainous roles. The comic scenes, involving S. P. Pillai, Manavalan Joseph and Nellikkodu Bhaskaran, failed to evoke the desired response.

Will be remembered: As the first independent work of music director R. K. Shekhar. For the good music and for the excellent performance of Kottarakkara Sreedharan Nair in the title role.
Posted by Ajay Menon at 3:19 PM No comments: