This film marked the entry of M T Vasudesvan Nair, the noted Malayalam novelist to Malayalam cinema. This film was the screen version of his short story ‘Snehathinte Mukhangal.’ Produced by Shobhana Parameswaran Nair under the banner ‘Roopavani’ and directed by A. Vincent, the film was a major box office hit. It was a glorious start for the MT-Vincent combination which went to give some super hit movies later.

MT made use of the Valluvanadan dialect throughout the film. Probably this might be the first film in the language to use a peculiar dialect throughout. The film portrayed the decline and fall of a joint Hindu family in Kerala very realistically. Through the central character the film reveals the tensions between traditional family structures in a declining feudal system.

Traditional rituals like ‘Sarpapattu,’ sport like ‘Kaalapoottu" (bullock race) and the festival of ‘Thiruvathira’ were elaborated upon in the film. More than just touching on them, for the first time perhaps, all of these were canned strictly adhering to the customs prevalent at the time.

Major portion of the film was shot at Satya Studios where huge sets of a traditional ‘naalukettu’ were put up. Perhaps, if the scenes had been shot in a real ‘naalukettu’ the film would have had a different dimension. One reason to stick to indoors was because outdoor shooting was not quite popular those days. The main location of the story is the banks of river Bharathapuzha. The film revolves around a joint family headed by Kunjikrishna Menon (P. J. Antony). His sister Madhavi Amma (Shanta Devi) and her children, Balan (Prem Nazir), Aniyan (K. P. Ummer) and Kochammini (Jyothilakshmi) stay with him. Balan is in love with Bhagi (Sharada), Menon’s daughter, and his ‘murappennu.’ Menon’s son Kesavankutty (Madhu) is in love with Kochammini, his ‘murappennu.’ The story revolves around these two love affairs.

Menon wants his daughter to marry Aniyan and Balan sacrifices his love for the sake of his brother and to keep the family intact. But the family is divided following a dispute between Menon and his brother (Kunhandi). Kesavankutty betrays Kochammini. Balan decides to conduct Kochammini’s marriage with his friend Chandran (Murali). He struggles to mobilise the huge dowry claimed by Chandran’s parents. But the marriage does not take place due to a misunderstanding that springs up. This disgrace brought about on the family results in the suicide of Kochammini.

What made this film popular was that the audience identified with the story and the characters. Even the minor characters in the film like the good hearted Veerankutty (Nellikodu Bhaskaran), Chathan (Nilambur Balan), and Menon’s grand daughter Minikkutty (Baby Vrinda) were impressively developed. All these characters were those that people saw around them in their neighbourhood.

The film stood out for some superb acting by Prem Nazir, P. J. Antony, newcomer Jyothilakhsmi and Sharada. The film bagged the National Certificate of Merit from the President of India from among regional films in 1965

The scenes presented by Adoor Bhasi, S. P. Pillai and Kunjava provided comic relief. Other than aiming at the box office there was no justification in the inclusion of these scenes and characters in an otherwise serious film. These characters did not connect with the main storyline.

The lyrics by P. Bhaskaran were set to tune by B. A. Chidambaranath. The duet by Shanta P. Nair and S. Janaki, ‘Kadavathu thoni aduthappol...’ became a super hit. The song was similar to ‘chhed chhaad,’ a style prevalent in Hindi cinema where two groups or persons tease each other. It closely resembled the Asha Bhonsle-Geeta Dutt duet, ‘Janoo janoo ri kaahe khanke tora kangana... from the 1959 Hindi film ‘Insan Jaag Utha’ (Music by S. D. Burman). Probably this is the first Malayalam film song in this genre. The timeless K. J. Yesudas hit ‘Karayunno puzha chirikkunno...’ and S. Janaki solo, ‘Kaliyaakki enne kaliyaakki...’ were the other popular hits from this film.

Will be remembered: As M. T.Vasudevan Nair’s debut as script writer and for Jyothilakshmi’s debut in Malayalam. It will also be remembered as the first film of the successful Vincent-MT combination. Also for the good music, particularly for the Yesudas solo, ‘Karayunno puzha chirikkunno...’
Posted by Ajay Menon at 9:10 AM No comments:

Email ThisBlogThis!Share to TwitterShare to FacebookShare to Pinterest
Labels: Murappennu 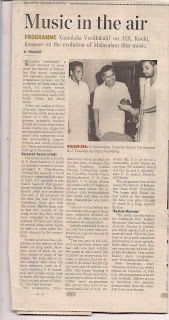 Email ThisBlogThis!Share to TwitterShare to FacebookShare to Pinterest
Labels: Ganalokaveedhikalil, The Hindu 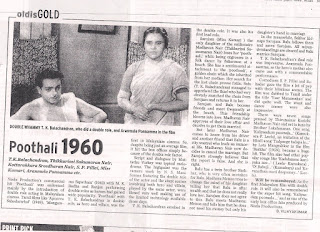 Posted by Ajay Menon at 7:31 AM No comments: 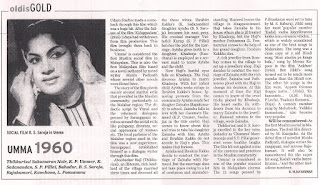 Posted by Ajay Menon at 7:30 AM No comments: