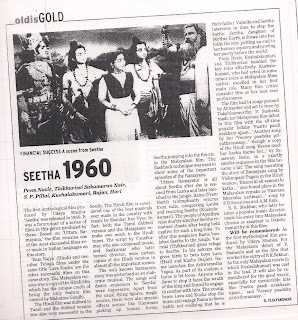 Posted by Ajay Menon at 7:29 AM No comments:

Email ThisBlogThis!Share to TwitterShare to FacebookShare to Pinterest
Labels: Seetha 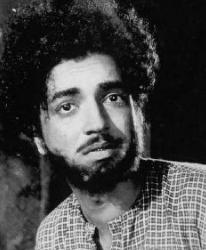 ALL OUT ENTERTAINER Prem Nazir did full justice to his role
Released in August, 1952, this is one of the earliest boxoffice hits in Malayalam Cinema. Produced by K.V.Koshy and Kunchacko in Udaya Studios, the film was remade in Tamil and subsequently a dubbed Telugu version was also made. Though publicised as a ‘social’ film it had nothing to do with any social issues. It was a family melodrama with strange twists and turns far removed from reality. In spite of all this the film was a huge success.

Photography by E.R.Cooper and editing by P.V.Varghese enhanced the quality of the film. It ran to full houses for weeks and months.

Mohan (Prem Nazir), the only son of the rich landlord of ‘Lakshmi Bhavanam loses his father in childhood. The manager (Nanukuttan) manages to secure all the wealth of the family, throwing Mohan and his mother out on the streets. Soon, Mohan loses his mother also. Adopted by a kind hearted land lord of ‘Ananda Bhavanam,’ Mohan is brought up along with his children Venu (Thikkurissi) and Sarojam (Kumari Thankam) After the death of the landlord, Venu takes charge of the household.

Kamalam (Pankajavalli), the daughter of the wicked manager who cheated Mohan and his family, is married to Venu. Kamalam’s lecherous brother Ramu, who is in love with Sarojam, plays all kinds of nasty tricks to get married with the support of Kamalam. But Sarojam, who is in love with Mohan, staves off his advances. Pressurised by his wife Venu expels Mohan from the house. Ramu and his gang beat up Mohan. He seeks refuge in a nearby estate.

Meanwhile, Kamalam hatches a plot for the marriage between Ramu and Sarojam. Venu is poisoned and Sarojam donates blood to save her brother. Venu is saved. He realises his mistakes and understands the misdeeds of his wife. Mohan returns to the village. Venu gives his sister in marriage to Venu bringing the film to a happy end.

The film had all the ingredients of a typical entertainer– songs, dances, comedy scenes etc. Though the story was absolutely unrealistic it did not in anyway affect its success. The dance dramas ‘Swargavaathil’ and ‘Ramanan’ that were included were added attractions.

Prem Nazir and Thikkurissi excelled in their roles. Kumari Thankam, the glamour girl of the time was the main attraction. The comedy team of S.P.Pillai, Adoor Pankajam, Muthukulam and Vanakkutti, were reduced to mere repetitions of the usual comic scenes.

The grand success of the film encouraged the producers to remake it in Tamil, ‘Pashiyin Kodumai.’ It had Prem Nazir, Thikkurissi and Kumari Thankam in the lead roles along with other leading stars of Tamil cinema like M .S .Draupadi, and Madhuri Devi in important roles. The success of the Tamil remake paved way for a Telugu dubbed version titled ‘Aakali Piluppu.’

The Malayalam film had 12 songs penned by Abhayadev and tuned by P. S. Divakar. Some of the songs became super hits and a few have stood the test of time. Though noted actor Jose Prakash made his debut as playback singer in the film ‘Shariyo Thetto,’ released in 1953, ‘Vishappinte Vili’ was the first to be released. A duet ‘Chinthayil neerunna jeevitham…’ sung with Kaviyoor Revamma turned a super hit. Another duet sung by A.M.Raja and P.Leela, ‘Mohiniye, enn athma Mohiniye…’ was also very popular.

Will be remembered: For the songs, ‘Chinthayil neerunna… and ‘Mohiniye enn athma Mohiniye…’ Also, Jose Prakash’s first released film song was in this movie. It will also be remembered as the film in which Ambika, who later went on to reign supreme as heroine in the late 50s and early 60s, made her debut.
Posted by Ajay Menon at 12:04 PM No comments:

FAVOURITE Thikkurissi and Miss Kumari
The history of Indian cinema starts with the silent movie ‘Raja Harishchandra’ (1913) produced and directed by Dadasaheb Phalke. The legend of the King of Ayodhya, Raja Harishchandra, might be the most repeated Hindu mythological episode adapted for Indian cinema. It was repeated seven times during the Silent Era and more than 25 times in various languages later.

Anyone who watches this film closely is sure to find that it is a carbon copy of two other South Indian films which told the same story, ‘Satya Harishchandra’ (Kannada-1943), which was successfully dubbed into Tamil, and another original Tamil version of the same story, ‘Harishchandra,’ released in 1944. The Kannada versionis considered to be the most successful film on this story. The Tamil dubbing is believed to be the first dubbed film in South India.

The Malayalam film copied scenes from both the Tamil and Kannada versions. The sets, costumes, song sequences and even the dialogues, in some of the scenes were exactly the same. Though both the Kannada and the two Tamil versions had long runs in the state, the Malayalam film was also a runaway success.

Clever camera tricks by N.S.Mani and directorial skills of Antony Mithradas gave life to the magical scenes. At a time when technology was not developed, with limited resources at their disposal, they did an appreciable job. Scenes of natural calamities, wild animals attacking the villages etc. were filmed using camera tricks and included effectively in the film.

Based on a popular Mahabharatha legend, the film is about King Harsishchandra’s devotion to truth. The wager between the two sages, Viswamithra and Vasishta brings hardships to Harishchandra. Sent to exile by Viswamithra for profaning his ‘yaga’ Harishchandra is separated from his wife Chandramathi and son Lohithaksha.

A scene from the Kannada version

Chandramathi and Lohithaksha become slaves to the landlord Kalakanta. Harishchandra is reduced to becoming an attendant in a cremation ground and given the charge to execute Chandramathi. Moved by the king’s sacrifice, honesty and devotion to truth, the Gods descend and brings the morality play to a happy conclusion.

Thikkurissi as Harishchandra, Miss Kumari as Chandramathi, G. K. Pillai as Viswamithra, Master Hari as Lohithaksha and Jose Prakash in the minor role of Harishchandra’s minister Satyakeerthi performed their roles well. S. P. Pillai as Kalakanta and Adoor Pankajam as his wife did well in what were different from their usual comedy roles.

The film had 15 songs penned by Thirunainar Kurichi and tuned by Brother Lakshmanan. This film is considered as the first Malayalam film of playback singer P. B. Sreenivas though there is some difference of opinion on this point. The song ‘Mahal thyagame mahithame...’ sung by him became a hit. ‘Atmavidyalayame…’ sung by Kamukara Purushothaman remains one of the best by the singer and one of the best in the language. The lyrics and the sequence seems to have been inspired by the famous Grave Diggers scene in Shakespeare’s ‘Hamlet’. Another song ‘Aarundu chollan...’ (P.Leela-Kamukara), though an imitation of the Tamil film song ‘Vettunda kaikaley…’ by P. A. Perianayaki from the film ‘Jnanasoundari’ (1948) also became a huge hit.

Will be remembered: As the first successful mythological film in Malayalam. For the song ‘Atmavidyalayame…’ and also as the Malayalam debut of singer P.B.Sreenivas.

B. VIJAYAKUMAR
Posted by Ajay Menon at 11:56 AM No comments: