Morality tale The film was hailed as a realistic breakthrough

‘Nagarame Nanni,' released in 1967, can be easily considered one of the best social movies produced in Malayalam. The film represents an impressive attempt at realism that began in Malayalam cinema with ‘Neelakuyil' and which attained more attention by the mid-60s. Most of the earlier social movies in the language were a far cry from reality, with unusual twists and turns.

Produced by Shobhana Parameswaran Nair under the banner of Roopavani, the film was directed by A.Vincent. A. Venkit handled the camera for the film that was shot partly outdoors, in Madras and at Satya, Prasad and Vikram Studios.
The story, script and dialogues were by M. T. Vasudevan Nair. In fact, this was a story written specially for the film. Most of the other films of this writer were based on his already published literary works. The dialogues had a strong Valluvanadan flavour and this was one of its attractions.

The star cast included noted stars of that time like Prem Nazir, Madhu, K. P. Ummer, P. J. Antony, Sukumari etc. in main roles. The lyrics by P. Bhaskaran were set to tune by K. Raghavan. Dances choreographed by P. S. Gopalakrishnana also impressed.
The film told of the tensions between tradition and the culture of the city, in the form of a morality tale, the story of a family that migrates from a village to the city of Madras in search of a better life. In the city some of the family members succumb to depravity and vice. In spite of the high melodrama the film was hailed as a realistic breakthrough. The dialogues penned by MT was perhaps one reason for this. This film is considered one of MT's best contributions to Malayalam cinema.
In the words of one of the characters, the city is a ‘concrete jungle lit up with neon lamps,' where humanity has no value. It may be purely accidental perhaps, but the film closely resembles two films that were shown in India at some film festivals during that period. One is ‘The Conquerors of the Golden City' (1965) directed by Getin Gurtop and the other is ‘Birds of Exile' (‘Gurbet Kuslari' in Turkish - 1964) directed by the noted Turkish film director Halit Refig. K. Balachander's Tamil film ‘Pattina Pravesham' (1977) also was based on the same theme and closely resembled these foreign films.
Madhavankutty( Prem Nazir) is from a rich aristocratic family in a remote village in Kerala that was reduced to penury due to his spendthrift father, whose extravaganza in conducting temple festivals took away the wealth of the family. After the death of the father Madhavankutty's family consisting of his mother (Bharathi Menon), sister Kunhilakshmi (Jyothilakshmi) and brother Unnikrishnan depend on their rich aunt's family. Madhavankutty leaves home in search of a job and reaches Madras. Raghavan (Madhu) gives him shelter in his small room where he lives with some of his friends who have small jobs in the city. With the help of Anandan Pillai (P J Antony), Madhavankutty gets the job of a driver. Anandan Pillai's daughter Bharathi (Usha Nandini) falls in love with Madhavankutty and Madhavankutty begins dreaming of a happy life. Madhavankutty brings his mother and younger ones to Madras. Kunhilakshmi joins tailoring classes and Unnikrishnan joins a Polytechnic. But the cruel hands of the city do not let the family lead a happy life. Kunhilakshmi falls in to the trap of Mrs. Mudaliar (Sukumari) and Captain Das ( K P Ummer) and ends up as a call girl. Raghavan tries to correct her but in vain. Madhavankutty meets with an accident. Except Raghavan nobody helps him in the hospital. One night Madhavnkutty chases the taxi in which Kunhilakshmi was travelling and his car crashes. He dies. Madhavankutty's mother returns to the village with her daughter and son.
Prem Nazir excelled in his role of the dutiful son in the family and so did Madhu as the good friend of Madhavankutty.

Jyothilakshmi as the innocent village girl in the begining and as the call girl did her role in an impressive manner. The villainous roles handled by K P Ummer and Sukumari also impressed the audience. In contrast to the Malayalam cinema's archetypes, the film offered some well drawn and realistic characters, which one could find aroundThe four songs penned by P Bhaskaran were tuned by K. Raghavan. All the four songs became instant hits. S Janaki sang the romantic hit, ‘Manjani poonilavu Peraattin Kadavingal.....' The song describing the city life, ‘Nagaram Nagaram Mahasagaram....." (Yesudas) remains one of the best in Malayalam cinema. The dance number, sung by L.R. Easwari, ‘Mullappoo Maala vilkum .....' also became a hit and stood the test of time.

Why remembered: As one of the best social movies and for the excellent music.

B. VIJAYAKUMAR
Posted by Ajay Menon at 2:27 PM No comments: 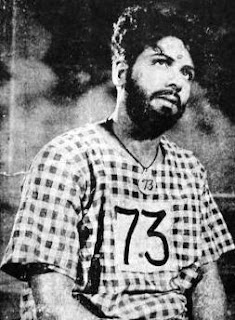 Vasudevan Nair entered into film production when Malayalam cinema was at its infant stage and majority of the earlier films were not very successful. The film producers in the State, other than film companies like Udaya Studios, were not enthusiastic about entering the field. Vasudevan Nair and his wife Thankam, two of the brightest stars of musical opera (sangeeta natakam) and whose fame spread all over the country with the success of their musical drama ‘Yachaki', had virtually no screen experience. Vasudevan Nair took the bold step of producing a Malayalam film, and that too ignoring the failure of ‘Nirmala' (1948), a film produced by another artiste from musical operas, Artist P. J. Cherian.

The brave attempt of Vasudevan Nair to produce a Malayalam film at a time when very few films were being made in the language deserves appreciation. But ‘Kerala Kesari' failed.

The film was a loose adaptation of the Robin Hood kind of character portrayed in some of the early Indian films. The success of such films might have prompted the producer to select a similar theme deviating from the regular social stories which he used to present on the stage, like ‘Yachaki', ‘Sasidharan BA,' etc.

Several stage artistes played roles in the film. Vaikom Vasudevan Nair and his wife Thankam took the lead roles. Others like ‘Akbar' Sankara Pillai, Vaikom Raju etc. were seen on the silver screen for the first time. The film, when released faced severe criticism from critics like M. Vasudevan Nair popularly known by his pen name, ‘Cinic'. While Tamil films with similar themes fared well at the box office, ‘Kerala Kesari' failed to repeat this feat. One is not sure whether this criticism had an adverse effect, overshadowing the merits of the film.

The melodious tunes composed by Gnanamani were rendered by musical talents like Vasudevan Nair, Thankam, Kaviyoor Revamma, Periyanayaki etc. The failure of the film forced Vasudevan Nair and his wife Thankam bid goodbye to films forever and return to the stage. This was a loss for Malayalam cinema could not exploit the musical talents of these singing talents. It must be noted that both of them were sensations on the stage and the audience enjoyed their singing.

‘Kerala Kesari' is a costumed adventure fantasy, the hero being an Indian version of Robin Hood. The king of Maninagaram (P. Mahadevan) is cheated, dethroned and banished from the country by Regent Chandra Varma (Sankara Pillai). The royal priest (K. K. Aroor) and army officer Prathapan (Vaikom Raju) lend support all the treacherous plans of the Regent. When the noble army chief Rajendran (Vaikom Vasudevan Nair) voices his protest against the Regent and the priest, he is imprisoned. 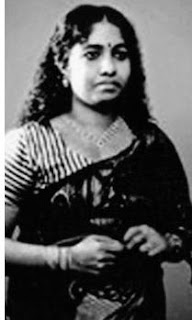 His wife Thankam
Rajendran escapes and seeks refuge in the house of the royal maid, Hema (Durga Varma). The Regent's men shoot Rajendran when he tries to escape from the trap set to capture him. Wounded, Rajendran falls into the sea and is believed to be dead. But Rajendran emerges as Kerala Kesari who makes the forest as his hideout, becomes the saviour of the downtrodden and the hapless victims of the Regent's evil rule.

Bhavani (Thankam Vasudevan Nair) who had lost her father, again a prey of the Regent's cruelty, joins hands with Kerala Kesari in his mission. Kerala Kesari falls in love with Bhavani.

Meanwhile, the Regent arrests Hema and keeps her captive in his palace. Kerala Kesari reaches the palace and rescues her. Hema's house is set to fire and she rushes to the place to save her father. Hema is arrested and later freed. This is part of a plan to find the hideout of Kerala Kesari. The army reaches the forest hideout and in the ensuing battle between the two forces, Hema dies. Kerala Kesari, Bhavani and their followers, are captured and brought before the court of law.

The banished ruler appears before the court and reveals the facts behind the evil drama enacted by the Regent and his men. The people come to know that Kerala Kesari is not a traitor. They hail him as a patriot who fought against the evil rule in Maninagaram. The king takes over the reins of the country. Rajendran weds Bhavani.

There were 11 songs, penned by Thumpamon Padmanabhankutty and set to tune by Gnanamani. They were all based on classical ragas. The song based on Desh raga, sung by Vaikom Vasudevan Nair, ‘Neethiyitho bhuvaney...' became a huge hit. Another popular song was a devotional on Lord Ayyappa, ‘Ayyappa akhilandokodi nilaya…' (Vasudevan Nair and chorus) and is considered the first devotional on Lord Ayyappa in Malayalam cinema. There is a lengthy ‘virutham' and the song is of almost six minutes duration, quite rare those days. Other melodies include ‘Janmamo hathamaay vyamohathale...' and ‘Venal kaalam poye...' (Thankam Vasudevan Nair). A Hindi ghazal ‘Aaj kaho museebathiya...' was also included in the film.

Will be remembered: As the only film in which Vaikom Vasudevan Nair and Thankam, acted. As the film in which a devotional song on Lord Ayyappa was included for the first time. And, of course, for its music.
Posted by Ajay Menon at 9:28 AM No comments: