‘Chitramela' was Malayalam cinema's first portmanteau film, consisting of three short films. ‘Yauvanam/Vandikkari' (1974) and ‘Kerala Café' (2009) are two other popular Malayalam films produced under this category. It was European directors like Rosseto Rosselini who promoted and popularised this trend in films.

Along with the Tamil film ‘Bhakta Ramadas' (1935), produced by Parameswari Sound Pictures, another ‘bit film' (as it was referred to in common parlance) titled ‘Milakaay Podi' was also shown. But the Tamil movie ‘Sirikkathe' (1939) produced by Sree Rajam Talkies is considered as the first portmanteau film in India. In the case of the former film, it is believed that the bit was added to the feature film ‘Bhakta Ramadas' and was not originally planned as a portmanteau.

‘Chitramela,' was produced under the banner of Sree Movies. Veteran actor T. S. Muthiah made his debut as producer-director in this film. The music, composed by G. Devarajan, was the highpoint of the film.

The segment titled ‘Nagarathinte Mukhangal' was first in the compilation. S. L. Puram Sadanandan wrote the dialogues for the script by M. K. Mani. A crime thriller, this short film showed the tragic fate of children left alone at home while the parents enjoyed themselves at late-night parties and meetings. One such couple, Sheela and Ummer, leave their daughter at home with the servant and go for a party . The naughty girl plays with the telephone, dials numbers and interacts with the person at the other end of the line. One such call results in trouble. The call was to a house which happened to be the venue of a murder. The girl says over the phone that she knew what was happening there. The murderer (Kottayam Chellappan) locates the number, kidnaps the girl and attempts to kill her. But the intervention of the police saves the girl's life. 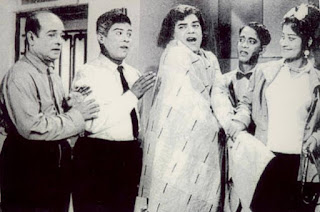 The second short film, ‘Penninte Prapancham', was a hilarious comedy. The story by T. E. Vasudevan was inspired by a Laurel and Hardy film. The dialogues written by Bhavanikutty provided space for humour. The characters in the film were the original film stars themselves. Adoor Bhasi, Manavalan Joseph and Bahadur are trained to drive a car by S. P. Pillai, their ‘asan' or teacher. They encounter hilarious situations with the women they meet. All the students and their teacher go into deep sleep. They wake up after 50 years to find that men have lost dominance; women, they find, have become all powerful in the world.

‘Apaswarangal', story and dialogues of which were by Sreekumaran Thampi, was the longest in the compilation. The film told the story of a tragic love affair between a blind girl and a street singer. Seetha (Sarada), the daughter of a ‘coolie' in a colony is in love with Babu (Prem Nazir), a street singer. A city wastrel's evil eye falls on Seetha and Babu is beaten up severely by his goons. A famous dancer happens to listen to Babu's singing. Babu goes on to accept the patronage of the dancer, separating him from Seetha.

The colony is hit by an outbreak of small pox. Except for Seetha and a small boy all the others die. Seetha and the boy leave in search of Babu. She hears Babu's voice from a theatre. Babu rushes to meet his lover. Seetha who is elated falls into his arms and dies. ‘Chitramela' is remembered for its music. All the eight songs, written by Sreekumran Thampi and tuned by G. Devarajan, became super hits. Seven solos by K. J. Yesudas, and a duet with S. Janaki, are considered gems in Malayalam film music. ‘Madampotti chirikkunna... (Yesudas-Janaki), ‘Akasha deepame...', ‘Paaduvan moham...,' ‘Kannuneer kayalile...,' ‘Nee evide nin nizhal evide..,' ‘Apaswarangal...,' ‘ Chella cheru kiliye...,' ‘Nee oru minnalaai ...' (all by Yesudas) are still popular.

Will be remembered: As the first portmanteau film in Malayalam. For its excellent music and as the debut film of T .S. Muthiah as producer-director.

Email ThisBlogThis!Share to TwitterShare to FacebookShare to Pinterest
Labels: Chithramela