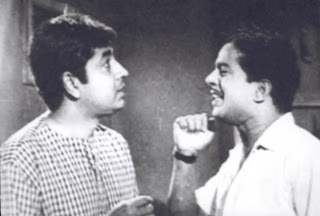 Prem Nazir and Sathyan in a scene from the film


‘Adimakal' won the President's Silver Medal for the best Malayalam film of the year under the category of regional language films. The film is considered one of the best social movies of the 60s.

A woman-centred movie, the heroine of ‘Adimakal' is a maid servant. Mythological characters, princesses and queens, college girls, society ladies etc. were the heroines of Indian films from the beginning of cinema. Probably the Telugu film ‘Devatha,' was the first Indian film that had a servant in a central role. The Malayalam adaptation of this film, ‘Paavappettaval' (1967) did not do well. But ‘Adimakal' was a huge hit.

This film was based on a novel of the same title authored by R. P. Parameswara Menon, popularly known by his pen name ‘Pamman' and was the first in the series of his novels that went on to be made into films. In ‘Adimakal' the focus was on sexual exploitation of maid servants in their work place and the injustice towards them. The novel also pointed a finger at the fraud religious leaders and sages.

The script and dialogues were written by Thoppil Bhasi. He was able to convey the message strongly through his sharp dialogues. Cinematography by Melli Irani and editing by M. S. Mani was commendable. The film was directed by K. S. Sethumadhavan.

Saraswathi Amma (Sheela) lives a saintly life having denounced all worldly pleasures. Anandan (Jaycee), her younger brother, lives with her. Saraswathi Amma is a disciple of Giridhara Yogi (Adoor Bhasi) whose hermitage is in her town. Ponnamma (Sarada) is her faithful servant. She manages the household giving her mistress time to engage herself in prayers and religious discourses. Raghavan (Prem Nazir) is a deaf-dumb, odd-job man in the neighbourhood. He nurses a silent love for Ponnamma.

Anandan's friend Appukuttan Pillai (Sathyan) is a bachelor and lives nearby. As requested by Anandan, Saraswathi Amma agrees to send him food from her house. Appukuttan takes a liking for Saraswati Amma and even proposes to marry her. Though Saraswaathi Amma gets annoyed she develops a soft corner for this kind hearted man.

Anandan seduces Ponnamma and she becomes pregnant. He then abandons Ponnamma and absconds. Ponnamma is thrown out of Saraswathi Amma's house, but she finds shelter in Raghavan's house. Raghavan says that he is responsible for her state thereby saving her from shame. Appukuttan Pillai brings Anandan back home and forces him to ask Ponnamma's hand in marriage. But she refuses and prefers to marry Raghavan.

Giridhara Yogi elopes with Raghavan's sister who was his favourite disciple. Saraswathi Amma realises that her religious gullibility has been the cause for so much suffering. She discards her saffron robes for a new life. Appukuttan Pillai gets transferred to a place quite far away and boards his train. He is pleasantly surprised to find Saraswathi Amma in the same train, willing to accept him as her life-partner.

Sathyan, Prem Nazir and Sheela were impressive in their roles. Deviating from the usual role of romantic hero, Prem Nazir came up with a stunning performance. Adoor Bhasi also excelled as the bogus ‘sanyasi'.

Songs written by Vayalar Rama Varma were set to tune by G. Devarajan. The devotional number ‘Chethi mandaram thulasi...' (P. Susheela) was elevated to the status of a prayer song. ‘Thaazhampoo manamulla thanuppulla...' (A. M. Raja) was another hit and one of the singer's best in the language. The other hits include ‘Manaseswari maappu tharoo...' (Raja), ‘Indumukhi ..... (P. Jayachandran), and the chorus ‘Narayanam bhaje...' led by Jayachandran. A few verses ‘Lalitha lavanga Latha…' from Jayadeva's ‘Geeta Govindam' rendered by P. Leela was also a hit.

Will be remembered: As a National award winning film, debut film of the novelist Pamman and for the excellent music.
Posted by SJoseph at 8:10 PM

Email ThisBlogThis!Share to TwitterShare to FacebookShare to Pinterest
Labels: 1969, ADIMAKAL