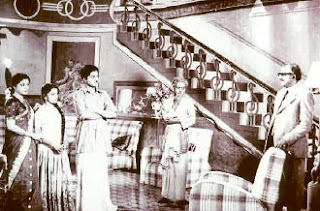 ‘Ponkathir’ released in 1953 was one of the two successful films released during the year, the other one being ‘Ashadeepam.’ Produced by P. Subramaniam and directed by E. R. Cooper under the banner of Neela Productions the film was a marital melodrama. It told the tale of the ideal woman, the long suffering and self sacrificing wife. The story and script by K. P. Kottarakkara was in line with such tear jerking Tamil socials of the time and proved successful at the box office.

This was the second film produced by Neela. It was technically perfect when compared to earlier Malayalam films. Sound recording by Krishna Elamon and cinematography by V. Ramamoorthy was worth mentioning. The top stars of that era, Prem Nazir and Lalitha added star value to the film. Playback singer Kamukara Purushothaman and stage actor C. I. Parameswaran Pillai made their film debut through this film. T. R. Omana who had appeared in some dance scenes in earlier films, acted in a minor role in this film.

A rich industrialist Prabhu (C. I. Parameswaran Pillai) runs a factory. His son Ravi (Prem Nazir) assists him in all his business projects. Madhu (K. P. Kottarakkara ), the manager of the factory is loyal to his master and the business flourishes. Vikraman (Thikkurissi), the crooked nephew of Prabhu is an employee of the factory. Vikraman tries to manipulate the assets of Prabhu.

Ravi is in love with Radha (Lalitha), daughter of a poor farmer and friend of Prabhu. Vikraman also loves Radha and tries to win her love by all crooked means, but in vain. Prabhu brings home Radha when her father dies. Vikraman and his wicked friends Mathu Pillai (Muthukulam Raghavan Pillai) and Pappan (S. P. Pillai) play nasty tricks and try to turn Prabhu against Ravi’s love for Radha. But to their dismay, Prabhu conducts the marriage of his son Ravi with Radha. Prabhu come to know about the nasty tricks of Vikraman and terminates him from the factory.
Now Vikraman and his aides try to defame Radha and Prabhu. They spread scandals about the relations between the father-in-law and daughter-in-law, Prabhu and Radha. Suspicion springs up in Ravi also. Sarala (Bharathi Menon), the lady love of Vikraman is engaged to trap Ravi and turn him against Prabhu and Radha. Ravi expels a pregnant Radha from the house. Madhu’s mother (Aranmula Ponnamma) and sister Thulasi (T. R. Omana ) console Radha. Prabhu bring home Radha and he assigns all his wealth in Radha’s name. Sarala who was after the wealth of Ravi, now betrays him.

Vikraman forces Ravi to take revenge on Prabhu and Sarala. Madhu intervenes and saves their lives. Vikraman and his group are arrested by the police. All misunderstandings is cleared, and a reformed Ravi rejoins the family.
Lalitha and Prem Nazir excelled in their roles. Bharathi Menon as the vamp also did well in the negative role. The success of this role paved way for similar roles for her later. The comic scenes by S. P. Pillai and Adoor Pankajam helped defuse the tense situations in the film, though they were repetitions from the films of the past. The music of the film was just average. The 13 songs penned by Thirunainar Kurichi Madhavan Nair were tuned by Brother Lakshmanan followed the trend of imitating tuhes of other language film songs. The prayer song, ‘Anjana Sreedhara charumoorthey Krishna...’ sung by Ganabhooshanam Lalitha in the traditional style became very popular and is considered as one of the best devotional songs in Malayalam. All the songs, except the solo by Jikki, ‘Paadoo manasamey padoo...’ which was a direct copy of the Latha number from the Hindi film ‘Daag’ (1952) ‘Laage unse nain laage....’ (Shanker-Jaikishan) faded out from the memory within a short time. Kamukara sung his first film song, a verse filmed on the climax scene, ‘Ashanka thimiram...’ to make a winning debut.

Will be Remembered: The film be remembered as the debut film of playback singer Kamukara Purushothaman, actor C. I. Parameswaran Pillai, and was the first character role of T. R. Omana.
Posted by Ajay Menon at 2:54 PM

Email ThisBlogThis!Share to TwitterShare to FacebookShare to Pinterest
Labels: Ponkathir