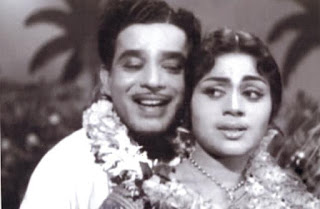 Even if the story is simple and artistic, technical brilliance can bring unusual success for a film. B. N. Reddy’s black and white classic Telugu film Devata (1941) is a best example for this. Exhibited in various film festivals, the film was praised in popular magazines by critics. Malayalam film Pavappettaval released on October 12, 1967 was a remake of the Telugu classic film. Produced by ‘Movie Masters’ and directed by P.A. Thomas, the Malayalam remake failed to impress the audience and flopped. Some film critics attribute the film’s failure to the lack of “artistic and technical brilliance” and improper star cast. Popular stars like Chittoor V. Nagiah, Kumari, Parvathi Bai and T Suryakumari were cast in important roles in the Telugu classic and the film is counted among one of the best of these legendary stars.

Sathyan, Kamaladevi, Aranmula Ponnamma and Vidhubala were assigned with the corresponding roles in the Malayalam remake. Kamaladevi and Vidhubala were “new faces” at the time. Other artists who acted in the film were Adoor Bhasi, Muthukulam Raghavan Pillai, Govindankutty, Khadeeja and others. This was the debut film of Rani Chandra who appeared in a guest role (her name appeared in the title cards and song booklet as ‘Miss Kerala’ – she won the title in 1967) Muthukulam Raghavan Pillai wrote the script and dialogues; the original story for the Telugu film was written by K Ramnath. The opening scene and the ending were exact copies of the original. Shot at Syamala and Thomas Studios, cinematography was by P. K Madhavan Nair and the editing was by Ceylon Mani. Some of the songs composed by Chidambaranath became popular. The film opens with the a prayer song as in the Telugu film. Bhavani Amma (Aranmula Ponnamma ) lives happily in a village with her highly educated son Gopi (Sathyan) and daughter Radha (Vidhubala) who is a student. Bhavani Amma treats their servant Lakshmi (Kamaladevi) and her brother Ramu (Master Shaji) as her own family members. Bhavani Amma gives Lakshmi all the privileges of a daughter.

Gopi is attracted towards Lakshmi. One night , when the family members are away from the home to attend a marriage in a neighbouring village, Gopi takes advantage of Lakshmi with a promise of marriage. Soon Gopi leaves the village when he gets a job in the city. Lakshmi gets pregnant. She is unable to contact Gopi, and is unable to disclose her condition to others out of shame. Lakshmi leaves home with Ramu without telling anything to Bhavani Amma. A helpless Lakshmi works as a maid in order to earn a livelihood and even “sells” her blood to hospitals. She gives birth to a baby boy. Gopi is shocked on learning of Lakshmi’s departure when he returns to the village. Bhavani Amma pressurises Gopi to get married. Gopi is emotionally broken by Lakshmi’s departing. He confesses to his mother about his relation with Lakshmi. The girl with whom Gopi’s marriage is fixed elopes. Bhavani Amma requests Gopi to go in search of Lakshmi. Ambujakshy (Sukumari) who runs a hotel gives refuge to Lakshmi. She has a hidden agenda - of exploiting Lakshmi’s youth. A guest in the hotel tries to molest Lakshmi and as she attempts to escape Ambujakshi is injured.

Lakshmi meets with an accident as she runs away to escape Ambujakshi’s men and is admitted to the hospital. Gopi meets Ramu on the way and reaches the hospital. In a happy ending to the social movie. Bhavani Amma accepts Lakshmi as her daughter-in-law. The film ends with the scene of Gopi and Lakshmi , along with their child, singing in a garden, an exact replica of the scene from the original Telugu film. Comedy involving Adoor Bhasi (as the manager of Ambujakshi’s hotel), Muthukulam Raghavan Pillai (as a marriage broker) and S. P. Pillai (as Pappu ‘Ashaan’) were repetitions of slapstick scenes from earlier films. Such scenes diluted the emotional tempo of the social movie.

Songs written by P. Bhaskaran and M.K.R Pattyath were set to tune by Chidambaranath. The romantic duet Vrindavaniyil Radhayodoru naal… (K.J. Yesudas-P. Leela) was an instant hit. Other hits include Ambili mama ambili mama… (Leela), Nin mukham kandappol… (B. Vasantha), and Saranam Ayyappa saranam Ayyappa… (Leela, Vasantha and Renuka). Will be remembered: As the debut film of Rani Chandra and for the song Vrindavaniyil Radhayodoru naal…
Posted by Malayala Sangeetha Sahithyam at 5:03 PM

Email ThisBlogThis!Share to TwitterShare to FacebookShare to Pinterest
Labels: Pavappettaval