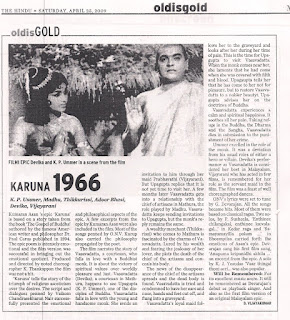 Email ThisBlogThis!Share to TwitterShare to FacebookShare to Pinterest
Labels: Karuna 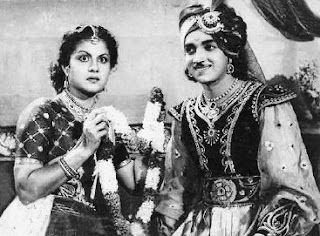 ‘Manthravadi’, a costumed fantasy tale on screen, released in 1956 is the first Malayalam film under the fantasy film genre. Produced and directed by P.Subramaniam under the banner of ‘Neela Productions’, the film was an instant hit. Fantasy films in Hindi and other South Indian languages performed well at the box office in 1950s. This nust have encouraged the producer to make such a film in Malayalam also.

Telugu cinema gave more importance to fantasy films during those days, like Gemini film’s super hit ‘Balanagamma’ (1942) directed by the legendary C. Pulliah. Telugu movies were exhibited in Kerala also during early 1950s. The story department of Neela Productions borrowed some sequences and situations mainly from these films and devoloped the story for ‘Manthravadi’.

The dialogues penned by the noted dramatist Nagavalli R. S. Kurup was matching with the time line of the story and was appreciable. The film had all the essential factors of a commercial movie: Songs, dances, fights, comic scenes and the presence of the popular stars of that time. The kitsch imagery and studio sets provided an appropriate style for the fantasy tale.

The grand success of the film prompted the producer to go for a Tamil version of the film under the same title ‘Manthravadi’, which also did well. The evil magician Mahendran (Kottarakkara Sreedharan Nair), a follower of the ‘Kapalakundala’ cult takes an oath to sacrifice 101 chaste and beautiful girls to please the Goddess Kaali. He abducts girls from the nearby kingdoms. He chooses princess Mallika (Miss Kumari), daughter of King Veera Varma (Jose Prakash) as the final prey. The king promises to entrust her to the magician once she attains marriageable age in return for saving the royal family from the dacoits. The prince of a neighbouring kingdom, Priya Kumaran (Prem Nazir) is Mallika’s childhood friend. Priyakumaran loses his father and the kingdom, and the queen, Sushila Devi (Aranmula Ponnamma) flees to the jungles where she lives along with her son and Vinayan (Muthiah), son of the loyal servant of the royal family.

Kottarakkara as the magician, Aranmula Ponnamma as Sushila Devi and Kumari Thankam as Nityakalyani, another princess, did their roles quite well. S.P.Pillai and Adoor Pankajam performed the comic scenesThe 14 songs penned by Thirunainar Kurichi Madhavan Nair were set to tune by Brother Lakshmanan. Most of the songs were imitations of popular Hindi tunes ‘Piya Piya Piya mera Jiya pukare.....’ (Kishore Kumar, Asha Bhosle) from the film ‘Baap Re Will be remembered:

One of the major box office hits of Neela Productions.
Posted by Ajay Menon at 2:50 PM No comments: