Stories from Hindu religious texts were a favourite subject for Indian cinema right from the beginning. Most of the silent and sound films produced with such themes were successful at the box office. Silent films like ‘Mahasati Anasuya' (1921), ‘Sukanya Savithri' (1922) and sound films of the early period ‘Sati Ahalya' (Tamil-1937), ‘Sati Sulochana' (Kannada-1934), ‘Savithri' (Hindi-1937) are a few examples.

Sheelavathi is a name that appears in several Hindu texts. A chaste woman and a dutiful wife, she is not one of the five Sati's (Savithri, Sita, Draupadi, Anasuya and Mandodari) mentioned in Hindu Puranas and Upanishads.

Sheelavathi is so popular that a phrase has been coined that is often used to refer to a chaste woman or dutiful wife.

‘Sheelavathi Naalu Vrutham' , a poetic work, believed to be authored by Kunjan Nambiar, that tells the story of the ‘ideal' woman, was first published in 1874. The same story was written and performed by Nambiar as ‘Ottanthullal', a folk art popularised by him.

The Malayalam film ‘Sheelavathi' (1967) was probably the first Indian movie that told this story on screen. Produced under the banner of Aries Films and directed by P. B. Unni, the film was not successful. The high point of the film was the music by G. Devarajan. 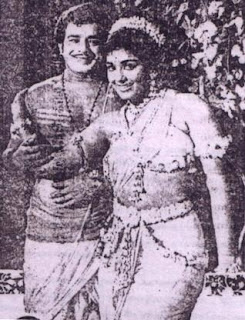 Sheelavathi (K. R. Vijaya) and Ugrathapas (Sathyan) students and inmates at the hermitage of sage Athri (P. J. Antony) fall in love. They get married after they complete their Vedic lessons. Ugrathapas establishes his own Vedic school. The couple leads a happy family life. Lord Shiva and Parvathi subject Sheelavathi to a test of character.

Ugrathapas contracts leprosy. He tortures Sheelavathi for no fault of hers. The chaste and dutiful wife, Sheelavathi, runs the household by begging, makes no complaint and nurses her husband sincerely. One day Ugrathapas orders his wife to take him to the mansion of the courtesan (Vijayalalitha).

While carrying her husband in a basket on her head Ugrathapas's leg strikes Sage Mandavya's (Kottayam Chellappan) head. The sage curses Ugrathapas saying that he will die at the next sunrise.

To save her husband's life, Sheelavathi starts a penance. She pleads to the Sun not to rise the next morning and it does not. This is the power that the dutiful and chaste acquires in the story. She is now able to control the natural forces. The sun does not rise; the universe comes to a halt. Anasuya (T. R. Omana), the consort of Sage Athri appears before Sheelavathi and requests her to withdraw her penance. And she does so. Ugrathapas dies only to be brought back to life by the blessings of the Trinity. Sheelavathi's character is proved beyond doubt.

The nine songs written by P. Bhaskaran were set to tune by Devarajan.

Will be remembered:As the first Indian film to narrate the story of Sheelavathi. And for its music.

Email ThisBlogThis!Share to TwitterShare to FacebookShare to Pinterest
Labels: Sheelavathi

‘Kunjali Marakkar' tells the story of the legendary 16th century naval captain. The life and times of martyrs and freedom fighters caught the attention of Indian cinema from its early period. But filming of such stories was not possible during British rule. Before Independence, the Censor Board had banned a Tamil social film, ‘Thyagabhoomi' (1939) directed by K. Subrahmaniam on charges that the film contained dialogues and sequences that went against the British. The Malayalam film ‘Veluthambi Dalava' (1962) that falls in this genre was not as successful as ‘Kunjali Marakkar.'

Many historical films, in various languages, were made after Independence. And most of them focused on the lives of martyrs and freedom fighters. They became the subject of Hindi like ‘Padmini' (1948), and ‘Jhansi Ki Rani' (1953); Tamil films like ‘Veera Pandya Kattabomman' (1959) and ‘Kappalottiya Thamizhan' (1961).

‘Kunjali Marakkar,' produced by T. K. Pareekutty and directed by S. S. Rajan was shot at Satya and Syamala Studios, Chennai. The film was edited by G. Venkitaraman, story and dialogues were by K. Padmanabhan Nair and fights directed by R. N. Nambiar. Kottarakkara Sreedharan Nair, Prem Nazir, P. J. Antony, Kottayam Chellappan, Sukumari etc. played important roles in the film. Playback singer P. Jayachandran made his film debut in this film, though his songs in ‘Kalithozhan' (1966) were released first. The music, composed by B. A. Chidambaranath, was a high point of the film.

The Chief Minister Mangattachan's niece is in love with Poovalappil Nanu (Prem Nazir), a warrior-merchant. Rumours are spread that Nanu is killed by the Portuguese. Meanwhile, the Portuguese, with the support of the local traders and king's nephew try all their wicked tricks to capture Kozhikode and even to murder the Samoodiri. But Marakkar's timely intervention saves the country and the king. Nanu goes to Kochi and gets into the Portuguese troop and even manages to become one of their captains. 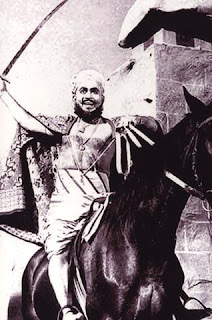 To save his people from Portuguese attacks, Samoodiri accedes to their request to build a fort in Kozhikode. Another fort is built at Kottakkal. When the land is attacked by forces from the sea, Marakkar stands up to them and staves off the attempted invasion. Nanu, in disguise as Antonio, captain of the Portuguese, takes charge of Kozhikode Fort. He lends secret support to Marakkar. But with the support of some local merchants and landlords, the Portuguese succeed in capturing Marakkar and killing him.

The film revolved around the brilliant acting of Kottarakkara in what must be one of his best roles. Premji also stood out in his role as the Samoodiri. P. K. Saraswathi, heroine of early Malayalam and Tamil cinema, made a comeback in this film. She played the role of the queen. Jyothilakshmi also impressed in the romantic role.

Music was one of the main attractions. There were six songs written by P. Bhaskaran and set to tune by Chidambaranath. A solo by K. J. Yesudas ‘Udikkunna sooryane…,' the romantic numbers ‘Mullappoo malayumai…' (P. Jayachandran), and ‘Muttathu pookana…' (P. Leela) were the most popular of them. Other hits include the devotional by S. Janaki, ‘Neeyallathaarundu abhayam…', and ‘Aattinakkare…' (Yesudas, Vasantha, Kamala).

Will be remembered:As the debut film of playback singer P. Jayachandran, for its good music and a stand out performance by Kottarakkara.

Posted by Ajay Menon at 6:03 AM No comments: