Melodramatic hit Satyan and Sheela in a still from the film


‘Bhagya Jathakam’, a family melodrama, was produced by P. Bhaskaran in association with B.N. Konda Reddy, one of the reputed film producers of South Indian cinema and brother of the legendary B.N. Reddy, founder of Vijaya - Vauhini studios. The film succeeded at the box office, though it cannot be considered as a block buster.
It was directed by P. Bhaskaran under the banner of ‘Kerala Pictures’.
The script, also penned by P. Bhaskaran, adopted the then prevalent formula for family melodramas with several twists and turns and on most occasions far from real life. Dialogues, penned by Jagathi N K Achari, was impressive and succeeded in conveying the emotions of the characters to the audience. The art portfolio of the movie was handled by P. N. Menon.
Except for a few scenes, the entire film was shot on the spectacular shooting sets at Vijaya, Vauhini and Udaya studios. The film was a pure family entertainer with all the mandatory factors like comic scenes, tear jerking sentiments, dances, songs, fights etc. One of the important factors that led to the success of the film was the performance of the super star Satyan in a double role. This was the first film in which Satyan performed a double role and probably the second Malayalam film with a double role performance (the first being ‘Poothali’ - 1960).
Doctor Surendran (Satyan) is the only son of the wealthy estate owner Shankaran Thampi (M G Menon). Surendran marries Radha (Sheela), daughter of a yoga teacher, Achuthan Pillai (Sree Narayana Pillai). Surendran’s mother, Parvathy Amma (Adoor Bhavani) loses her power of speech due to a brain tumour and she is bedridden. Shankaran Thampi’s nephew Rajasekharan Thampi (Kottarakkara Sreedharan Nair) and his wife Vilasini (Pankajavalli) manage the assets and household of Shankaran Thampi. RajasekharanThampi’s evil eye is on the wealth of Shankaran Thampi.
Shankaran Thampi suffers from a cardiac arrest when Surendran is away. Rajasekharan Thampi manages to get the signatures of his uncle, Shankaran Thampi on blank papers which he converts to documents and gets the entire wealth in his own name. Shankaran Thampi poisons his uncle then. Before breathing his last, Shankaran Thampi reveals to his bedridden wife the wicked deeds of Rajasekharan Thampi.
Surendran rushes home when he comes to know about the tragedy. On the way he has an accident, the head injury causes loss of memory and he is admitted to the mental asylum run by Dr. Poonjar (T S Muthiah). Radha is framed with false charges of immoral relations with one Surendran’s friends and is ill treated by Rajasekharan and his wife Vilasini.
A pregnant Radha is mercilessly turned out of the house. Chandran Pillai (Satyan), a comedian in a drama troupe resembles Dr. Surendran. Chandran Pillai visits the mental asylum where Surendran is admitted as an inmate. Dr. Surendran attacks Chandran Pillai and escapes from the asylum and Chandran Pillai is mistaken for Surendran by mental asylum authorities
A huge branch of a tree falls on Surendran’s head and in the shock, he regains his memory. Fate unites the couple, Surendran and Radha on the streets. Radha delivers a boy.
The culprits, Rajasekharan and his wife are arrested in the end and all ends well.
All believe that the ‘Bhagya Jathakam’, the lucky horoscope of the new born child of Radha and Surendran brought luck and peace to the family. Adoor Bhasi’s role of the Bhagavathar is considered as one of his best.
The ten songs penned by P Bhaskaran were set to tune by M S Baburaj.
A duet by K J Yesudas and P. Leela – ‘Adyathe kanmani ....’ has stood the test of time and remains one of the best songs in Malayalam cinema.
Will be remembered:
First Malayalam film of actress Sheela. First double role performance of Satyan.
Posted by Ajay Menon at 3:03 PM No comments:

Email ThisBlogThis!Share to TwitterShare to FacebookShare to Pinterest
Labels: Bhagyajathakam 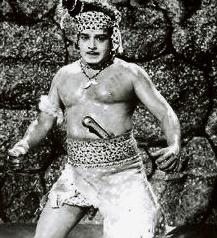 Tarzan-like Sathyan in the role of Paalaattu Koman


Paalaattu Koman,' produced by Udaya Studios under the banner of XL Productions, and directed by Kunchacko, was an adaptation of a ballad from the `Vadakkan Paatu'. Following the grand success of the screen adaptation of a similar ballad, `Unniyarcha' (1961), the producers picked up another such ballad for `Paalaattu Koman.'

The film tells the story of Palaattu Koman, a pioneer of kalarippayattu. `Komappan,' is an epic poem written by the noted poet Kundoor Narayana Menon, who in 1912 popularised the ballad of Paalattu Koman and his love affair with his enemy's sister. The script by Sarangapani for this film closely follows this epic poem by Kundoor.

The film was mainly shot at the Udaya Studios and the backwaters of Kerala. Leading stars of the time like Satyan, Ragini, Kottayam Chellappan, S. P. Pillai, Bahadur played major roles in the film. Rushyendramani (Sree Ramani in the title cards), the popular singing star of early Telugu cinema who was noted for her heroic roles, appeared in a major role. Besides sword fighting that was mandatory in these tales, the film included fights between man and wild animals. In fact, the hero's fight with a tiger was a highpoint of the film. These scenes were canned impressively using the available equipment and techniques of the time. Such fight scenes were factors that helped make the film a box office success.

The film tells the story of a feud between two families, Thonnooram Veedu and Kaippulli Paalattu Tharavadu. Chandrappan (Kottayam Chellappan) is the head of Thonnooram Veedu. He has an eye on the treasure kept in an underground cell of the Paalaattu mansion. A dispute between the children of the two families results in a bloody fight. Chandrappan kills the husband and all nine children of Kunki Amma (Rushyendramani) of the Paalaattu family.

Kunki Amma is rescued by the chieftain of the jungle where she was taken to be killed. She gives birth to a boy and takes an oath to destroy the entire Thonnooram Veedu. She reaches the Paalaattu in disguise along with her aide Pankan (S. P. Pillai). With the blessings of the snakes guarding the treasure at the mansion, Kunki succeeds in escaping from there with the treasure. Kunki's son Koman (Satyan) who undergoes training in martial arts becomes a master in the art. He starts off on a mission, to eradicate the Thonnooram Veedu clan and thereby to fulfil the desire of his mother.

Koman falls in love with Unniyamma (Ragini) without knowing that she is the sister of Chandrappan. Chandrappan and his group take Kunki Amma into custody and torture her. Koman defeats Chandrappan and frees Kunki Amma. All the members of Thonnooram Veedu, except Unniyamma, are killed. Koman marries Unniyamma bringing the film to a happy end.

Satyan, Ragini, Kottayam Chellappan, and Jayanthi excelled in their roles. S. P. Pillai and Bahadur did justice to their comic roles. Jijo and Boban Kunchacko who portrayed the childhood days of the hero also impressed.

The dialogues by Sarangapani had the North Malabar flavour, especially the use of local parlance. Costumes matched the time presented. The choreography by Hiralal, cinematography was the other factors that stood out in the film.

It is interesting to note that the producers had planned to name the film `Konki Amma' or `Kunki Amma.' The gramophone records of the film have the title as `Konki Amma' on them. This has caused confusion with regard to the credits of the songs.

Out of the 12 songs penned by Vayalar Rama Varma and set to tune by M. S. Baburaj, some of them turned super hits. The hit duet sung by A. M. Raja and P. Susheela, `Chandana pallakkil veedu kaanan vanna...' is considered as one of the best romantic songs in the language. The duet by Santha P. Nair and Jikki, `Poove nalla poove...' is another popular hit. The other hits from this film include `Ayyappan kaavil amme...' (P. Leela), `Manassinakkathu oru pennu...' (K. P. Udayabhanu). Will be remembered: The only Malayalam film in which the noted singing star of South Indian cinema, Rushyendramani acted. The film will also be remembered for its good music.
Posted by Ajay Menon at 9:18 AM No comments: