In the book titled, Sivakumar - 100, found a poster for the movie Poojapushpam with Sivakumar's picture on it (For those of you who do not know Sivakumar, he is dad of present day super starts Surya and Karthi)

For those of you who cannot read Tamil, here goes the translation.

We are still trying to validate the authenticity of this information. If you have watched this movie, please let us know 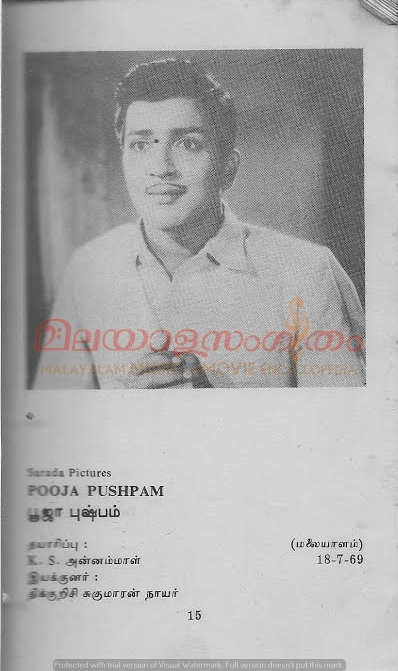 Posted by Malayala Sangeetha Sahithyam at 10:25 AM No comments:

Email ThisBlogThis!Share to TwitterShare to FacebookShare to Pinterest
Labels: Poojapushpam

There is some misunderstanding regarding the Tamil version of this film Poothaali.  But now, I could confirm that the Tamil version was not dubbed one, but remake.  found this advertisement in Pesum Padam September, 1961 issue 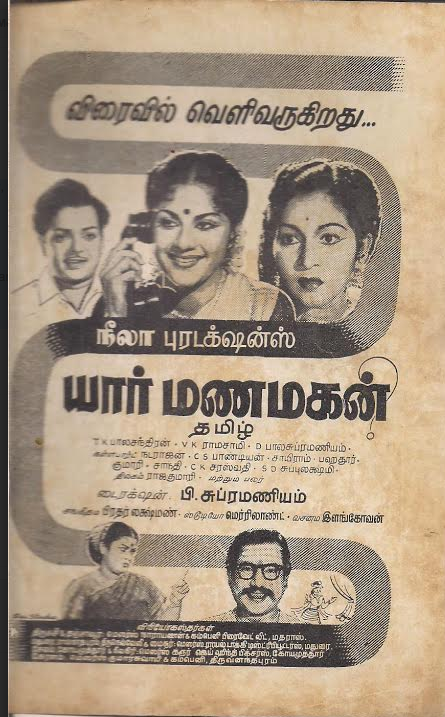 Posted by Malayala Sangeetha Sahithyam at 12:32 PM No comments:

Adventurous fantasy tales from literature were a favourite subject of Indian cinema. Most of the film production companies set up their own ‘Story Department’ and in Malayalam cinema, established companies like Udaya Studios and Neela Productions had such departments. Tales of Vikramaditya, Arabian Nights , and the collection of stories Kasi Majhili Kathalu in Telugu written by Madhira Subbanna Deekshitulu in 19th century were a treasure trove of material for these story departments. Stories of Malayalam films like Manthravadi (1956),Devasundari (1957) Pathaala BhairaviGulebakavaliwere developed from the said folk literature and they were successful.

Kadalamma released on August 31, 1963, produced and directed by M. Kunchacko under the banner X L Productions and shot at Udaya Studios was such an adventurous fantasy film for which Ponkunnam Varkey wrote the dialogues. The story was developed by the Udaya Studios crew. The film failed to impress the audience in spite of all the entertaining stunts, dances, special effects, camera tricks and comedy sequences.

To attract the audience, a few songs were shot in colour. Popular artists like Satyan, Kottarakkara Sreedharan Nair, Kottayam Chellappan, S. P. Pillai, B. S. Saroja, Rajasree (Gracy in the title cards) , Adoor Pankajam and Mavelikkara Ponnamma acted in the film. This was the debut film of actress Sushama (Maya in the title cards).

Queen Chithrangada (Mavelikkara Ponnamma) loses her only daughter Renuka (Rajasree) in her childhood. She was kidnapped by a gang of pirates led by Jayaraj (Kottarakkara Sreedharan Nair) during the traditional annual festival on the seashore. Renuka is taken to a faraway island. The queen proclaims to reward half of the kingdom to the person who brings back her daughter from the pirates. Years roll by. Fisherman Velu’s (Sankaradi) son Neelan (Satyan) is in love with Karthika (Sushama), daughter of Karuppayyan (Kottayam Chellappan), chief of the fishermen.

The island in which Jayaraj lives is on the verge of being swallowed by the sea. Jayaraj approaches queen Chithrangada for her support to build a bund around the island and promises her that he would find Renuka. The queen is unaware of the fact that it was Jayaraj who kidnapped her daughter and falls for his false promise. She sends her men including Neelan to the island for the construction of the bund. Meanwhile Jayaraj lays eyes on Karthika and is besotted by her. Jayaraj wishes to get rid of Neelan.

Jayaraj’s intention was to marry Renuka and claim the reward of half of the kingdom proclaimed by the queen. But Renuka hated her torturer Jayaraj. In a fit of rage, he pushes her into a crocodile pit. But Neelan arrives just in time to save Renuka and she falls in love with him. Enraged, Jayaraj imprisons Neelan. . Since Renuka escapes, Jayaraj plans to present before the queen a slave girl who resembled Renuka and claim the reward. Neelan is freed from the prison by Renuka.

Jayaraj and the slave girl (again Rajasree – double role) reach the palace. Queen Chithrangada accepts the slave girl as her lost daughter. Jayaraj alleges that Neelan and his parents were supporters of the pirates who kidnapped the princess. The queen sentences to execute them. According to the custom of the kingdom, the person sentenced for execution is given a chance to save life, if he could bring the “Nagamanikkam”, the magical stone hidden in the seas. Neelan sets out on an expedition to bring the Nagamanikkam.

The queen decides to conduct the marriage of the slave girl with Jayaraj. And the climax—Neelan returns with the Nagamanikkam. Jayaraj’s wicked plans are exposed. Renuka, the real princess, reaches the palace. But by that time, Neelan’s parents and Karthika were executed. The queen proposes to conduct the marriage of Renuka with Neelan. But Neelan refuses, because his love was for Karthika. The film ends with the scene of Neelan getting drowned in the sea with Karthika’s corpse in his arms.

Will be remembered: As the debut film of Maya (real name-Sushama) and excellent music.

Posted by Malayala Sangeetha Sahithyam at 12:14 PM No comments: