The Malayalam film ‘Ramanan', released in 1967 was the screen adaptation of the most celebrated poetical work of the renowned poet, Changampuzha Krishna Pillai, which was first published in 1936. ‘Ramanan' , a play written in the form of a verse is a pastoral tragedy. It was written by Changampuzha after the tragic death of his friend Edappally Raghavan Pillai in 1936 . The work is considered as the best elegy in Malayalam literature by critics.

Ramanan was popularised by Kedamangalam Sadanandan on stage in the form of a Katha Prasangam when Changampuzha was alive. This bestseller was reprinted several times and was prescribed as a text for the various courses in Malayalam literature by Kerala university.

Edappally Raghavan Pillai was a bosom friend of Changampuzha's and they were referred to as the ‘Edappally poets' since both hailed from the same place. Edappally Raghavan Pillai committed suicide in 1936 and the cause for the tragedy was the failure of a love affair in the life of the young poet. This tragedy upset Changampuzha. Soon after Changampuzha recovered from the shock and collected his thoughts in tranquillity to write ‘Ramanan', the best elegy in Malayalam literature. The elegy was published during the same year of the death of Raghavan Pillai, 1936 and was an instant best seller.
‘Ramanan' became a testament of romantic love. It is doubtful whether there is any youth in Kerala, who has not read or quoted lines from this elegy.

On the 60th death anniversary of Changampuzha, in 2008, ‘Ramanan' was brought out as a music album by the Carnatic vocalists Edapppally Ajit Kumar and Sreevalsan J. Menon under the label of Manorama Music.

It was D. M. Pottekkat, the renowned short story writer and novelist, who came forward to produce a movie, adapting the immortal Malayalam classic, almost 20 years after the death of the poet. D. M. Pottekkat wrote the script and dialogues and directed the film also. A few characters who are not in the original poetic work were created by the script writer for the screen version.
The film was shot at Vijaya, Vauhini and Shyamala Studios in Madras.
The camera was handled by U. Rajagopal and editing was done by K. Narayanan.
Dances were choreographed by Moorthy jointly with C. Gopalakrishnan. The film was technically good. But it failed at the boxoffice in spite of the leading stars like Prem Nazir, Madhu, Sheela etc in the cast. Music composed by K. Raghavan was excellent and the songs still linger in memories.

Ramanan (Prem Nazir) and Madanan (Madhu) are the two shepherds who are bosom pals. Meek and handsome, Ramanan used to sing and play the flute as he led the flock to the pasturesChandrika (Sheela), the daughter of the wealthy Advocate Peshkar (Kottayam Chellappam) gets fascinated by the charming shepherd with the sweet voice. Madanan warns Ramanan about the treacherous ways of the wealthy and advises him to keep away from Chandrika.
But Ramanan is blinded by his love for Chandrika and the lovers meet frequently on the hill top. The maid servant Bhanumathi (Kamaladevi) supports Chandrika. Chandrika's mother Madhavi Amma (Meena) comes to know about her daughter's affair with the shepherd. Her aristocratic parents prevents of Chandrika from meeting her lover. Though Chandrika stood by her lover at first, she later changes her mind. She agrees to marry Rajan (Ramu Kariat), an affluent youth that her parents chose for her. Bhanumathi raises her voice against the injustice towards Ramanan, and she is shown the door.

The broken hearted Ramanan hangs himself on a tree at the hilltop where he used to meet Chandrika. The tragedy occurs on the day of the wedding of Chandrika.
Prem Nazir and Sheela performed their roles in impressively.

Kottayam Chellappan, Kamaladevi and other artists also performed the roles assigned to them in a remarkable manner. The other characters created by the script writer for the film version, Karthi (Usha Kumari) who also loves Ramanan was one of the good performances in the film. Adoor Bhasi as the temple priest, Manavalan Joseph as Vallon, Karthi's father, also performed well. Though there was no significance deviation in the storyline the script and dialogues failed in passing on to the audience the emotions contained in the original work. The only relief was the songs, the lines selected from the original work. Music composed by K. Raghavan was excellent and based on folk tunes.

The romantic duet sung by K.P. Udayabhanu and P. Leela, ‘Kananachayayil Aadu Meikkaan Njaanum.....' is considered to be one of the best in Malayalam cinema.
Karimbuzha Radha made her debut as playback singer through this film.
The chorus led by her, ‘Malarani kaadukal ....' became an instant hit.
The other hits from the film include ‘Ekantha Kamuka ninte manoratham....' (Santha P. Nair), Velli nakshatrame ninne nokki,' ‘Chapala Vyamohangal...' (both by Udayabhanu), ‘Neelakuyile neelakuyile nee...' (Karimbuzha Radha).

Will be remembered:
As the screen adaptation of the immortal poetical work of Changampuzha
For the excellent music As the debut film of playback singer Karimbuzha Radha.
Posted by Ajay Menon at 3:31 PM No comments:

Email ThisBlogThis!Share to TwitterShare to FacebookShare to Pinterest
Labels: Ramanan 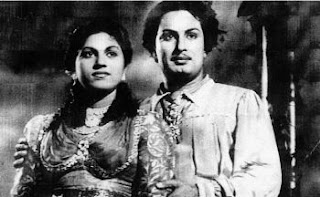 CHRISTIAN DEVOTIONALB. S. Saroja and M. G. Ramachandran in a scene from ‘Genova'

Released in 1953, this film was scheduled as an Easter release. But it finally hit the theatres 13 days after Easter. Despite the late release ‘Genova' was a huge hit. ‘Genova' was an adaptation of a musical opera (sangeeta natakam) that was staged in Kerala by prominent drama troupes under the titles ‘Genova' and ‘Genova Parvam'. Authored by one of the doyens of the Malayalam musical operas, T. C. Achutha Menon, this musical drama became very popular. The success of this drama and a Tamil film with a similar theme ‘Gnanasoundari' (1948) might have prompted the producer-director F. Nagoor to make this film. The story is a mix of myth and history. It had scenes about the glory of Mother Mary, the kind mother who descends to Earth in order to save her devotees etc. The film was remade in Tamil and this version was released two months after the Malayalam release. All the main roles in both the languages were performed by same artistes, except for the villain role enacted by Alleppey Vincent, which was done by P. S. Veerappa in the Tamil version. The presence of MGR, B. S. Saroja, M. G. Chakrapani, T. S. Durairaj and others added star value.

The dialogues of the Malayalam version were authored by the noted writer of musical operas, Swami Brahmavrathan. He also wrote the lyrics along with Peethambaram. The story, dialogues and even the comedy scenes of the film were exact copies of the successful musical opera ‘Genova.' Produced jointly by Eapen and F. Nagoor under the banner of ‘Chandra Pictures' the film was shot at Newton Studios, Madras. The film introduced MGR, the super star of Tamil cinema to Malayalam. And ‘Genova' remains the only Malayalam film in which he acted. Music director M. S. Viswanathan, actor M. G. Chakrapani, lyricist and dialogue writer Swami Brahmavrathan, lyricist Peethambaram, and director F. Nagoor also made their Malayalam cinema debut in this film. The veteran actor of early Malayalam cinema and one of the pioneers of musical operas, Sebastian Kunju Kunju Bhagavathar dubbed for MGR. Probably, this was the first instance in Malayalam cinema where the voice of an actor was dubbed.

Cipresso (MGR), the brave king of Ardreena, weds princess Genova (B. S. Saroja). Soon after the wedding the king starts an expedition to the borders to suppress the enemies from the neighbouring kingdoms. Genova could not convey to the king the happy news that she is pregnant at the time when the king left for the war. Minister Golo's (Alleppey Vincent) wicked eyes are on Genova and making use of the situation he tries to molest her. The queen's faithful servant Garthoos intervenes and saves her. The minister manipulates the situation and the blame is put on the servant. Genova and Garthoos are imprisoned by the minister. Genova gives birth to a baby boy in the prison.

When Cipresso returns to the palace after a victorious war, Golo turns him against the queen framing the false charges against her. Cipresso believes Golo. Garthoos is sentenced to death and Genova is banished from the kingdom. In the forest, Mother Mary appears before Genova and blesses her. Genova leads the life of a saint. Golo plots to dethrone the king. He spreads the rumour that the king is insane and that the kingdom is in trouble. Cipresso is imprisoned and Golo takes over the reins of the kingdom. The army chief, Annas (M. G. Chakrapani) also lays hatches a plot to grab power. A few faithful servants of Cipresso free their king from the prison. Cipresso and his men attack Golo and in the ensuing fight Annas is killed and Golo escapes. Cipresso also comes to know that the queen is innocent.

Cipresso goes on a search for Genova. In the forest, Golo and his men attack Cipresso. In the ensuing sword fight Golo is killed and the wounded Cipresso falls down. The young prince, Genova's son, finds Cipresso and takes him to Genova's abode. All the misunderstandings are cleared, the king and queen are reunited.

MGR and B. S. Saroja excelled in their roles. Both Alleppey Vincent and M. G. Chakrapani impressed in their villainous roles.

The 11 songs penned by Swami Brahmavrathan and Peethambaram were composed by M. S. Gnanamani, T. A. Kalyanam and M. S. Viswanathan. Some of songs became hits, especially the duets sung by A. M. Raja and P. Leela, ‘Kanninnu punyamekum divya...' and ‘Leela lolithame ikkanum...' Other hits include the lullaby ‘Omaney en anandakkambe...' and the devotional ‘Gathi nee devamatha...', both sung by Leela.

Email ThisBlogThis!Share to TwitterShare to FacebookShare to Pinterest
Labels: Genova 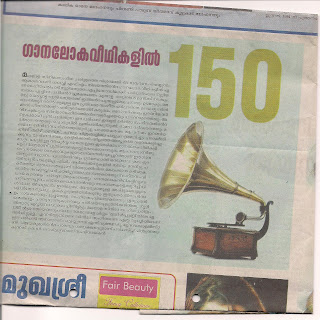