Released on December 7, 1973, Chuzhi is the only Malayalam film in which the popular South Indian actress Savithri acted. She was, in the 1950s and 1960s, the Nadikaiyar Tilakam(supreme actress) who ruled Tamil and Telugu cinema during 1950s and 1960s. Produced jointly by Hussain and Salam under the banner of ‘Navadhara’, the film was directed by Triprayar Sukumaran. Shot at Newton and Syamala studios, the outdoor scenes were filmed at the tea estates of Kalpetta in Wayanad. The dialogues were by Salam Karaasserry based on the script developed by N. P. Mohammed based on a story written by S.G. Bhasker. With cinematography by Moorthy and editing by Ravi, this was one of the early films in South Indian languages that was issued an ‘A’ certificate (entry restricted to only adults) by the Film Censor Board.
Besides Savithri, Sujatha, Kottarakkara Sreedharan Nair, Govindankutty, Bahadur, Nilambur Balan and others played important roles in the film. The music composed by M.S. Baburaj was the highpoint of the film. The film opens with the lines that this is the ‘story of a family shattered by alcoholism’. And the film ends with the Biblical lines ‘the wages of sin is death’. The story develops connecting these two thoughts.
Savithri, the central character, is alcoholic. There were similar characters in other Indian films like Sahib, Bibi Aur Gulam (Hindi, 1962) in which the character Choti Bahu (Meena Kumari) is an alcoholic. Savithri failed to impress in this role and the film bombed at the box office.

Varghese (Govindankutty) is a planter and lives with his wife Elizabeth (Savithri) and daughter Beena (Sujatha) in the tea estates owned by him. Varghese takes to the bottle following the death of his son. He also entices his wife into this habit and soon Elizabeth becomes an alcoholic.
Varghese dies and Elizabeth appoints Baby (Salam), son of her faithful servant Antony (Abbas), as the manager of their tea estates. Baby and Beena are classmates. Baby is a debauch, but Beena, who falls in love with him, is confident of changing him.

Elizabeth goes from bad to worse. In a drunken stupor she even gets into a physical relationship with Baby and becomes pregnant.

Beena comes to know of this. Out of shame and repentance, Elizabeth commits suicide. Beena rushes, revolver in hand, to shoot Baby. But even before she could do so Baby kills himself. Beena becomes a nun.
The songs written by Poovachal Khader and P.A. Kassim, with music by Baburaj became popular. Songs like Kandu randu kannu…(H. Mehboob and chorus), Hrudayathil nirayunna mizhineeraal… (S. Janaki) and Akkaldamayil papam periya… (K.J. Yesudas) and the parody song Oru chilli kaasumenikku… (Baburaj) were instant hits. The parody was a rare instance of the composer singing his own tunes from his earlier films.

Will be remembered: The only Malayalam film in which Savithri acted and for the music, especially the songs Kandu randu kannu…and Hrudayathil nirayunna…
Posted by Malayala Sangeetha Sahithyam at 10:04 AM No comments:

Email ThisBlogThis!Share to TwitterShare to FacebookShare to Pinterest
Labels: Chuzhi

Gaanalokaveethikalil -- AKLA Most Favorite Program of the last 25 years

On Sep 28th, 2014, there was a function organized by All Kerala Listeners Association at Govt Guest House , Kakkanad.  The programme was in connection with Silver Jubilee of Kochi FM station.

According to the survey of Listeners Association Ganalokaveethikalil, the landmark movie and music program by B Vijayakumar and team ranked as the best music based and popular programme broadcast by the station during the 25 years.

B Vijayakumar was invited for the function and honored  and given a Momento. 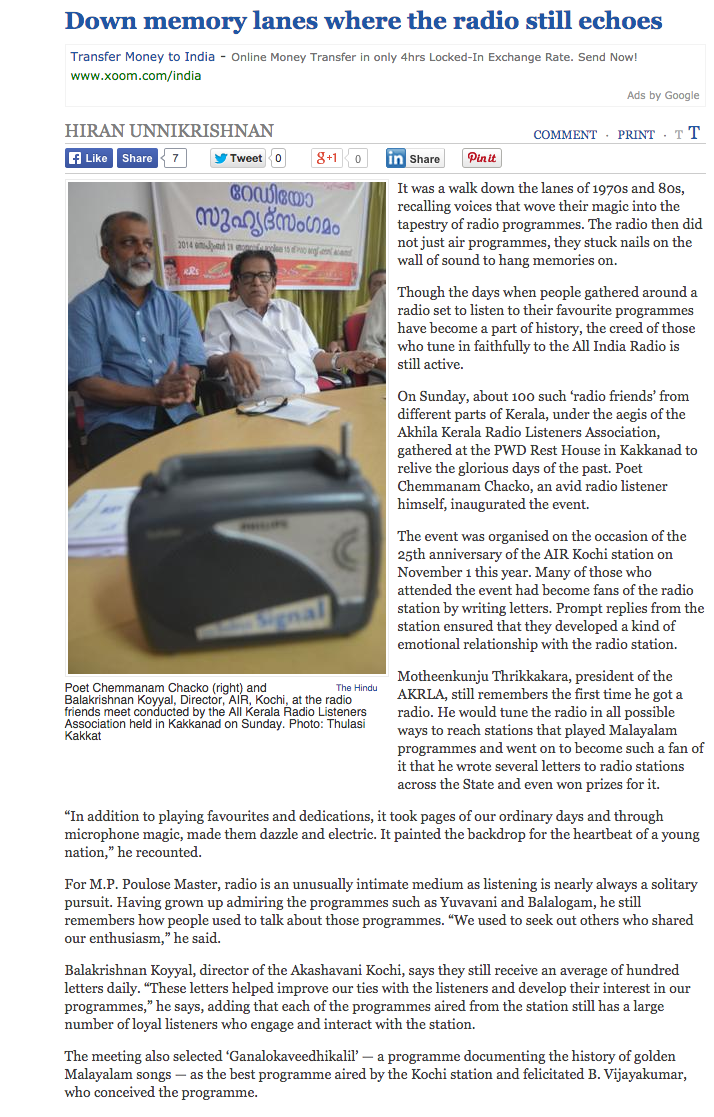 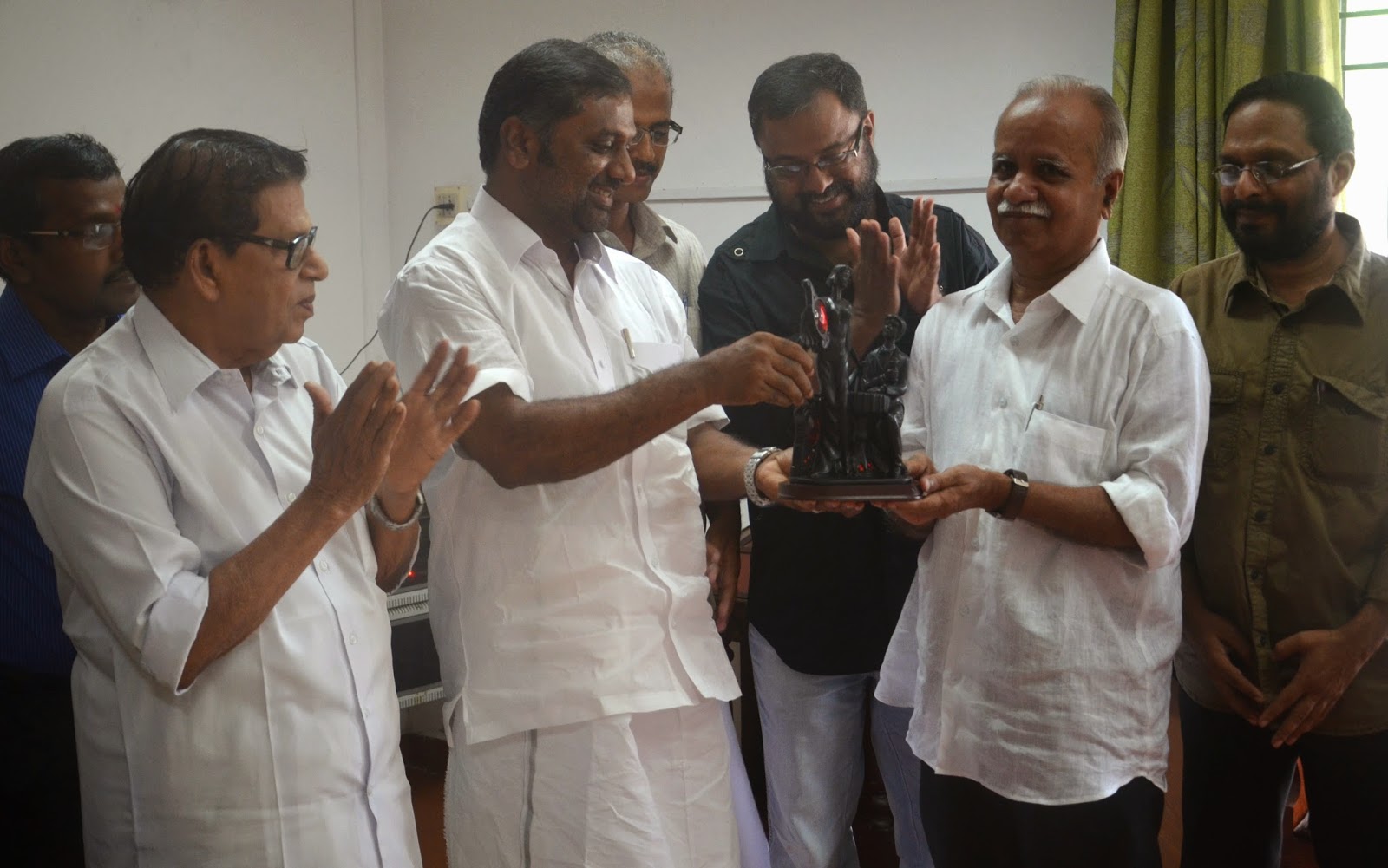 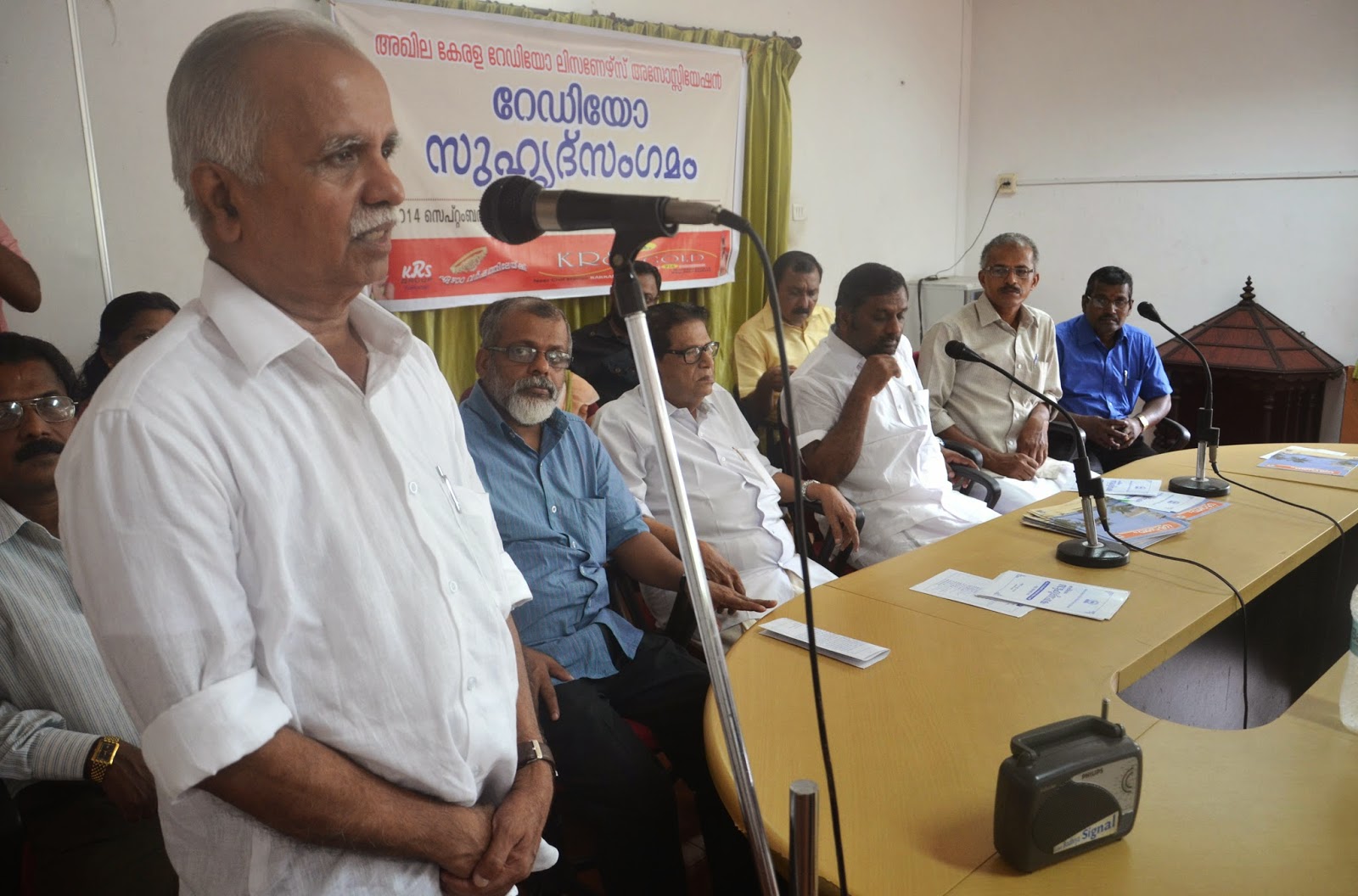 Posted by Malayala Sangeetha Sahithyam at 6:07 AM No comments: