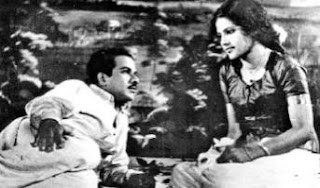 The film is based on a strong reformist story by PonkunnamVarkey. ‘Navalokam’ was a rude jolt to the zamindari system. The film also ignited sparks of women liberation.

The story is about the cruelty and indifference of landlords towards their tenants and peasants who toil for them. Estate owner Kurup seduces and then disowns a village girl, Devaki. This sparks off a revolt in the village. A workers union leader Gopi leads the revolt. Kurup goes on to marry Radha, an educated and socially committed worker. How Radha comes to understand the wickedness of her husband and frees herself from his immoral clutches forms the crux of the film.

The scene in which she breaks the ‘thali’ chain and throws it at his face was a strong jolt at the male supremacy. She boldly announces that a wife is not a slave and that she has equal rights. It is a call for equality of women in society. Radha walks out of the house.

Devaki, who comes to the house of the landlord is roughed up and pushed out. She is then taken to the hospital. Gopi informs the police about this and they come to arrest Kurup. Just when they are about to take him away Devaki, quite dramatically, reaches there. She pleads with the police not to arrest Kurup, saying that he was not at fault. This transforms Kurup. He accepts Devaki and they walk away together.

The screenplay was heavily loaded with pro-labour dialogues. This resulted in the censor board inflicting heavy cuts. This must have been the first Malayalam film that was clipped by the censor’s scissors.

‘Navalokam’ did not make the box office jingle. Perhaps this was because social issues were staple themes of films in other languages like those by stalwarts like V. Shantaram, K. Subramaniam, B. N. Reddy, Mehboob and others. They discussed issues like child marriage, enslavement of women, ill treatment of widows, untouchability etc. in their films.

During the early fifties, when the society was orthodox and stubborn about male supremacy, the scene in ‘Navalokam’ was certainly very bold. Prior to this none of the Malayalam films handled social themes in such a strong manner.

The music of the film was just average. Most of the songs were direct imitations of popular tunes from other language films. The song, ‘Gayaka gayaka…,’ rendered by P. Leela, was an imitation of the immortal melody ‘Aayega aayega aanewala…’ from the film ‘Mahal’ (1948). Other songs in the film were also based on tunes literally lifted from those composed by Pandit Amarnath, Anil Biswas etc. None of the songs from ‘Navalokam,’ except Kozhikode Abdul Khader’s debut film song ‘Thangakinakkal hridaye veeshum…’ became popular. This song stood the test of time.

Will be remembered: The film was a deviation from the trend of unrealistic love stories. It was a jolt to the zamindari system and male supremacy in the society. The film will also be remembered for Abdul Khader’s debut as playback singer.
Posted by Ajay Menon at 11:14 AM No comments:

Email ThisBlogThis!Share to TwitterShare to FacebookShare to Pinterest
Labels: Navalokam 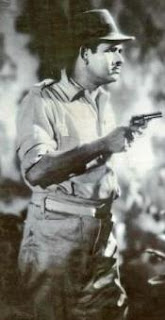 This second sound film in Malayalam had a close resemblance to the first talkie, ‘Balan,’ and the plot was similar to some of the Tamil films of the time. It had all the ingredients of an entertainer and was a huge box-office success.

The film shot extensively outdoors at locations in Thiruvanathapuram and Thripunithura was a new
experience for the audience . ‘Jnanambika’ was produced by Annamalai Chettiar and directed by S.
Nottani. It was based on a novel by C. Madhavan Pillai.

Jnanambika, the heroine of the film, is the daughter of a wealthy landlord, Rajasekharan. After the death
of her mother, her father marries again. Rajamani, the villainous second wife tortures Jnanambika, forcing her to run away from home. Rajamani, with the help of her secret lover Sreekumar, plots to appropriate the wealth of the mild-mannered Rajasekharan. Into this imbroglio enters Raveendran, the chivalrous hero.

It was with ‘Jnanambika’ that the concept of anti-hero came into Malayalam films. Raveendran has
been portrayed with negative qualities. There are many who consider Ashok Kumar’s role in the Hindi
film ‘Kismat’ (1943) as the first successful anti-hero. But ‘Jananmbika’ that had noted stage actor
Sebastian Kunju Kunju Bhagavathar in a similar role was released three years before ‘Kismat.’

Fights, car chase, twists in the plot, romance are all there in the film. Added to this are dances and songs.

There are 15 songs in the film. Music director, T. K. Jayaram Iyer, followed the trend of using popular
Hindi and other language film tunes for the songs in ‘Jnanambika.’ The lyrics are by Puthenkavu Mathen
Tharakan.

One of the songs, ‘Katha ithu kelkan, sahajare vaa....’ sung by Sebastian Kunju Kunju Bhagavathar, an

imitation of the K. L. Saigal-Kanan Devi duet from the film ‘Street Singer’ (1938) ‘Ghunghuruva baaje
chama chama cham....’ was the most popular of them. Though no prints of the film exist, the songs are still
alive.