The Malayalam film ‘Aalmaram' released in 1969 was the screen adaptation of the successful Tamil drama of the same title. Authored by Raman, an amateur playwright popularly known by his pen name, Bilahari, the Tamil drama was staged successsfully with screen and stage artistes like V.S. Raghavan, A.V.M. Rajan, Pushpalatha etc by the popular Tamil drama troupe, ‘Little Stage'.

The unusual success of this tamil play might have prompted the producer T K Pareekutty to produce its screen adaptation under his own banner, Chandratara Productions.

‘Aalmaram' was directed by A.Vincent and is one of the best directorial ventures of the renowned cameraman.

The popular Malayalam playwright, Thoppil Bhasi wrote the script and dialogues based on the Tamil drama for the Malayalam film. The catchy dialogues written by Thoppil Bhasi retained the highly emotional impact of the stage play. The story of ‘Aalmaram' was similar to that of films like ‘Kula Deivam' (remade as ‘Bhabhi' in Hindi), ‘Ghar Sansar' (1958) etc with women as the central characters.

Edited by G.Venkittaraman and with camerawork by A.Venkat, the film had good dances choreographed by K.Thankappan.

Ammini Amma (Kaviyoor Ponnamma) is the backbone of her family. Her husband Kesava Pillai (Kottarakkara) is a spendthrift and a gambler. 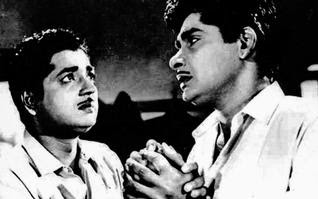 Ammini Amma struggles hard to run the household. Her elder son Gopi (Madhu) is a vagabond. Soman (Prem Nazir), the younger son is the sole hope of Ammini Amma. Soman is in love with Kusumam (Sheela), daughter of their neighbour Govinda Kurup (P J Antony). Both the families are happy to conduct the marriage of Soman and Kusumam.

But Ammini Amma insists that Soman's marriage be conducted only after her elder son Gopi's. Govinda Kurup brings a proposal for Gopi and it is finalised. But the girl's family comes to know about the irresponsible life of Gopi and they back out. Gopi quarrels with Govinda Kurup who had brought the marriage proposal. Kurup therefore is not keen to give his daughter in marriage to Soman. Soman leaves for Chennai where gets a job. The office typist

Kamalam is very considerate to Soman. Soman learns that Govinda Kurup is looking for a bridegroom for Kusumam and enraged, decides to get married before Kusumam. He approaches Kamalam but she tells him she loves him only as a brother. Meanwhile Gopi reaches Chennai to meet his brother Soman in his office, working late. There is a power failure. Kamalam is raped in the darkness. Soman is suspected of it. and he does not disown the charge against him to save his brother Gopi who is the culprit.

Meanwhile, Ammini Amma approaches Govinda Kurup to pay back moneylenders from whom Gopi and her husband had borrowed money. Out of shame and the disgrace brought to the family by her husband and elder son, Ammini Amma dies of a heart attack in Govinda Kurup's house. Kaviyoor Ponnamma's performance was at its best as the struggling mother who is portrayed as the ‘Aalmaram'.

Madhu as the vagabond son and Prem Nazir as the responsible son performed their roles impressively. Sheela, Kottarakkara, P J Antony and other artistes also handled their roles commendably.

Adoor Bhasi's performance as Radio Bhasi was a deviation from his usual comic roles.

As a good family drama in Malayalam cinema.

For the excellent music.

Email ThisBlogThis!Share to TwitterShare to FacebookShare to Pinterest
Labels: Aalmaram